It seems I hardly knew you at all, you were there and gone so fast. It was a good year, though I know lots of people have had a tough time.

A year of big changes. I hardly know where to begin. Normally I would say begin at the beginning and carry on till the end. But no, that makes too much sense. So I'll ramble. Get a big coffee.

I was working a full time day job at the start of the year, though the whole darned thing seemed pretty uncertain at the time. It lasted till August, much to my surprise. Now I don't have a day job, and I'm fairly sure I never will again. (Yay!) There might be some short term contract work here and there, but nothing to get too much in the way of photos and writing and staying fit and generally having fun.

One of my avid readers asked for a list of the various jobs I've had, to help keep them all straight. This seems like a good time for that, in reverse order, with commentary. There were some breaks in between here and there. As it turns out, I've had so many jobs I don't even remember all the company names anymore.

Penn West (7 contract renewals, 3 completely different teams with a wide gamut of people, major corporate blood-bath survival.)
Talisman (4 renewals I think, 2 sort of related teams with neat people, but overall a SAPping experience.)
Skystone again (contractor this time)
Enmax (actual company was one of their subsidiaries)
IMS Global (the oddity was actually being a supervisor to the developer in Mexico who also had the title of Vice President and who owned a bunch of stock in the company, while I was one of 2 mid-level managers.)
EOS Pipeline (I got a bunch of trips to the middle of nowhere out of the deal. Like High Level, and north of Red Earth, and north west of Fort MacKay.)
Skystone (lots of trips all over Alberta and parts of Saskatchewan. I think I've been on every paved road between here and Consort. One of the best jobs I ever had.)
The whole Amoco, BP Amoco, BP thing (the joke here was my team mates all went to places like Montreal, Houston, Dallas, and Denver. I got to go to places like Estevan, Chinchaga, and for my sins, Fox Creek. But once the corporate jet made a stop to pick me up.) Oh, and another joke to cheer you up. How do you pronounce "BP Amoco"? Answer. BP. The Amoco is silent. (Badabump!)
Nova Gas Transmission (several different teams depending how you count things)
Alberta Research Council (playing with (then) high end Macs (remember the Quadra?) helping to put together a half time show for the Grey Cup. I got listed in the game credits and all.)
Mark's Work Wearhouse (really short gig in a freezing cold building. I mean really cold)
The horrible inventory company who's name I've purged. (part time going to school, hated it, they could give master level training on how not to treat employees)
City of Calgary Wastewater plant operator (Of all jobs, this is the one that has taken hold of my imagination most. Well, not the job itself, but the place, inspiring several hundreds of thousands of words in an almost novel-like structure. Published any time now. Really. Soon. Stay tuned. Maybe don't hold your breath.)
ATCO (First job in Calgary. I almost got a trip to Tuktoyaktuk out of the deal, and had several near life threatening adventures with industrial truck and forklift tires. I still have no hair on the thumb side of my left wrist.)
XXX (back again, building more word processors
Federal Government Air Traffic Controller trainee at Malton International, now Pearson International. (I flunked and probably just as well.)
XXX (First actual full time job, building word processors. You would not believe how big, and how badly designed these things were!)
Pizza Delight (and I still love pizza)
Kentucky Fried Chicken (Even the smell makes me gag)
A greenhouse doing grunt work.

Along the way I've survived any number of corporate blood baths, and was spat out onto the sidewalk like used chewing gum several times. I suppose I'm better off than most, in that oil and gas was pretty good to me, but I'm tired of the roller coaster. I'm looking for something a little more sedate.

This was the year I was in the best shape of my life, I suspect, even including 2010 when I did Ironman Canada and when I was a kid. The big reason for that was running regularly throughout the year training for a marathon. I ended up running about 964K altogether according to iSmoothRun. The run tracker is a bit weird about indoor runs, and there were some erratic results. Runkeeper thinks I ran 991K this year, which is weird because it should only know about iSmoothRun results.

That's probably the highest milage ever. It was going so well until the end of August. I hadn't planned on working that month, and the combination of peak milage, working nearly full-time, and attending an all weekend writing conference was too much for me. My recovery went to crap and I fell apart for a while, in a running sense. I didn't worry about it, just dialed back over the fall and early winter. Just starting to ramp up again in case I want to try to do a marathon in 2017.

Plus I've come to like running. It clears my mind, relaxes me, and lets me think about novel story lines. I chat with my characters if I'm running alone. It used to be that I always ran alone. Then the best run buddy in the world showed up, and we've had a great time! Runs, bikes, swims, and some social occasions. Lots of fun.

This year I ran the bike paths along Nose Creek, Fish Creek, the Bow, and Elbow rivers, plus lots more. I'm thinking about what to run next year to keep me motivated. I'm trying to decide between running over every pedestrian bridge in Calgary (If I can get a list), or running every road in Woodlands/Woodbine, then working north into Cedarbrae if necessary. Even after living here 30 some years, I suspect there are some streets I haven't been on.

The swim has varied, sometimes really strong, sometimes cranky shoulders. The bike has been so-so.

Still ongoing. The idea for NaNoWriMo was to write the story of the behind the scenes antagonist in the other stories, from his point of view, treating him as the good guy. It started, and there's a couple good bits, but he's an elusive guy. Doesn't say much. That makes it difficult for me to write about him. My other characters are pretty chatty.

There was a big spurt of writing back in January, but I have to admit it hasn't gone as well as I'd hoped. Perhaps in the new year.

The new thing this year. I was always sort of interested in photography. Until not that long ago, the best way to avoid having your picture taken is to be the one holding the camera. We had some interesting photos come out of the point and shoot film camera. Umm, for some of you, film, oh sheesh, go look it up yourself.

Then digital cameras showed up. I was in charge of the one at Amoco for a little while. The storage medium was a 1.44 MB floppy disk. (You can look them up too.) I forget how many photos it held, but not that many. By today's standards the quality was crap, but it was a revelation to the inspectors and their managers. Now they had to believe the inspectors when they said they could see daylight, or the pit was THAT big.

Now everybody, almost, carries a camera in their pocket that can take stunning pictures. I mean, look at this. 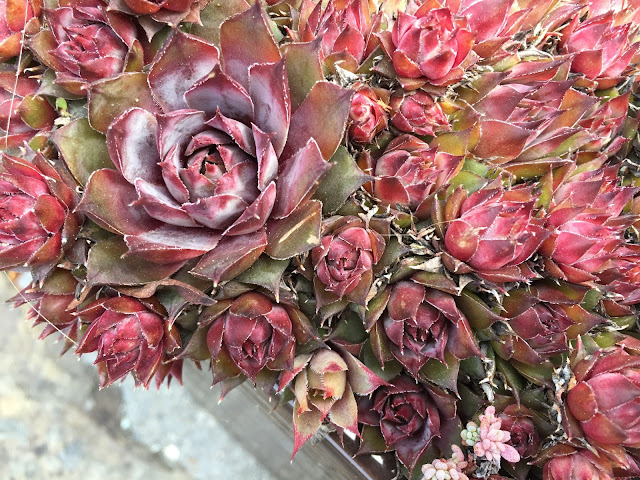 That was taken almost off hand, no thought, just bent over and hit the shutter button.

The iPhone will take great pictures, in a middle of the road sort of way. If the light's pretty good, and you've got a clear scene for the camera to work with, and you aren't shaking the phone too much, you're going to end up with a pretty good shot.

But if you want to take pictures of the moon or stars, or good shots of the skyline, or really good portraits, or a big landscape, or small flower petals, or any number of other things, and especially if you want to play with the resulting photo, you need a better tool. The equation is DSLR+good lenses+Lightroom=lots of fun. There are other similar equations.

As an example, here's another set of hens and chicks, the ones that live in the shadow of The Rose that Dominates, taken with the good camera, although late in fall so the colour has faded. Both of them can zoom in, but the one below can zoom in much further. 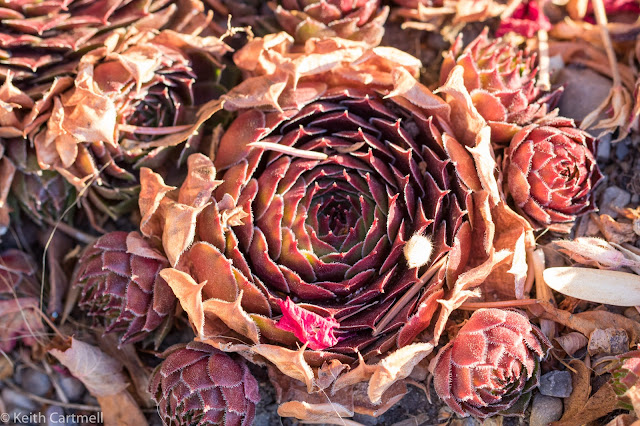 I'm up to almost 12,000 photos on the T6i now. About 4400 of them are on the iMac. I've gone back and started to assign keywords, and apply a star rating to these. The ones on the external drive I'll get to. There are 37 with a 5 star rating so far, meaning I've edited them, and really like them. These are the ones I'd show people if they took it into their heads to buy one of my photographs so they could print and frame it to hang in their living room and show all their friends. (A guy can dream, can't he?)


Wine
We didn't make much this year, due to a huge order the year before. But we've got 6 kits coming, and I'm looking forward to getting the cellar restocked. I've got a bunch of extra clear glass, so if anyone is running short let me know. The kits will be picked up in Red Deer early in the year. If you want to ride along let me know that too.

For 2017
I'm not a resolutions kind of guy. But just like the corporate people say you have to set goals so they can measure your performance so you know how disappointed to be when they don't give you a raise at the end of the year, I suppose I should put out a high level list of things I want to work on in 2017.

In no particular order:


That should keep me out of mischief.

And here, this is what I'm looking forward to to play me into 2017. 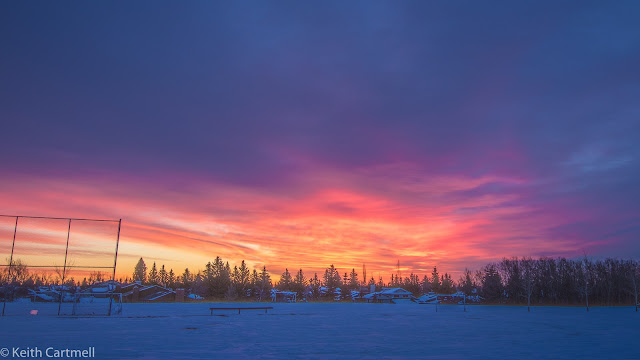