The smell of money

There's a saying in Brooks. Most of you probably don't know that Brooks is the home to several large meat packing plants. A bazillion animals a year are killed there, and their meat dressed for consumers. Most of the time it works pretty well, but when it goes wrong, oh boy. People die or are made seriously ill.

There is a peculiar smell just downwind of these plants, and it just so happens that the town is just downwind. There is no escaping the smell. I'm told that after a while one becomes accustomed. That saying comes out on a day when the smell is more noticeable than other days. "That's the smell of money." Or variations on the same theme.

Really, it doesn't matter if it's a meat packing plant, a feedlot, a distillery, a pulp and paper plant, a petrochemical plant, or many other industries. There is a smell downwind. Other than nearly puking one time driving through Kamloops (pulp and paper), and coming close at the Wastewater Plant (the combination of the distillery smell, the barminuters, and a hangover) the smells usually never bothered me. Not everybody is so fortunate. Sometimes the emissions are worse than a bad smell.

There is much talk recently of pipelines proposed for construction or expansion. Juxtapositioned with that is news of pipelines spilling petrochemicals into rivers, lakes, or oceans, of railcars burning in towns, of tankers running aground and spilling their contents. It shouldn't be a surprise that people are concerned. While it's true that nature can and does clean up small amounts of naturally occurring leaks, the timeline involved is usually much longer than a year or two. For some man-made by-products the timeline for natural cleanup is geological ages.

First up, as most of my readers know, our civilization is currently utterly dependent on the petroleum industry. It heats many Canadian homes during the cold winter. It is a feedstock for parts in nearly every manufactured product in use today. It's used in fertilizer to grow crops for humans and animals that humans eat. It provides the fuels used to create electricity and move our vehicles.

Second, while there is growing interest in energy from renewable sources, and rightly so, we aren't going to be creating industrial lubricants, or making plastics from solar or wind power. The petroleum industry isn't going away.

Pipelines are far and away the safest way to move petroleum products, provided they are properly constructed and maintained. Aye, there's the rub. There needs to be incentive for this to happen, or perhaps, a disincentive applied to the executives if there's a leak. Can you spell jail? It shouldn't be accountants making the inspection choices, it should be pipeline inspection professionals with expertise in corrosion mitigation.

As an aside, I'm glad the Northern Gateway got cancelled. With care and a bit of luck, and a lot of sensitivity it might have been possible to get the social license for the pipeline part of the deal, but it was botched by bad management and worse governmental oversight. Once Harper got his mitts on the file it was doomed. But the tanker part! Whoever thought that running tankers into Kitimat was a good idea needs to have their head examined.

More generally, people need to understand the tradeoffs involved in living in a civilized world. If you want to use a cell phone, you need to accept cell phone towers, and the mining that extracts the rare elements required. If you want to drive a car, you need to accept the entire value chain that creates the car and the fuel to power it. If you want to eat meat, your choices are to raise it yourself, cultivate a relationship with your local butcher who sources organic range raised animals, or accept the value chain that leads from a field to Brooks to your local supermarket. I could go on. There are similar tradeoffs in almost all areas of society.

Those industries exist now and change is slow. Wishing them away isn't going to get you anywhere.

NIMBY is a swear word in my vocabulary. I don't mind someone wanting to ensure that meat plants and feedlots are properly regulated to avoid contamination. I don't mind them wanting the cell tower disguised somewhat. I think it's a good idea to push for changes to the automobile ecosystem that creates a safer and more human-friendly world and tries to minimize the usage of petrochemicals. I'm completely for a regulator that ensures the various laws, regulations, guidelines, and engineering standards relating to the petroleum industry are adhered to. These are required because without them companies will engage in a race to the bottom as they try to maximize profit, and externalize all costs. I'm not impressed with companies that try to argue that any regulation is a business killer, and they'll go elsewhere. Which is why Canada needs federal standards, not provincial ones.

But to say NIMBY, and associated arguments is hypocritical at best. I have no time or respect for such people. Talk about the economic outcomes, talk about the environmental impacts, discuss the data. Not your feelings, or assumptions about some idealized world that might exist in the future. Whatever it is, we aren't going to get there in one step. Everybody needs to accept that compromises have to be made. Companies have to make some profit, but they also have to accept regulation and oversight. Society in general needs to accept those industries spin off money, salaries paid to employees or contractors, buying the various goods and services, managing the value chain from extraction, refining, production, transportation, marketing, end use, and disposal.

As I was out for a sunrise shot last week, I saw this and took the shots almost off-hand. I didn't think they would turn out. The light on the horizon didn't look that good, and there was all sorts of light just out of the bottom of the frame. 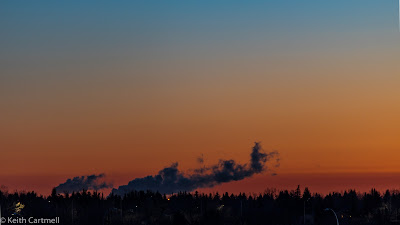