Yesterday me and the best running buddy ever dared I mean encouraged each other to run outside. We've often run in the cold before, but this year it's got really cold, really quick. Why, just on Thursday I was running in shorts and a tech shirt. Indoors, of course, but it wasn't that long ago that shorts and tech shirt were fine for outdoors. Sometimes the temperature swings are tough to deal with. It's easier if it gradually gets colder and colder. You can experiment with layers. You can re-remember which pair of tights chafe if you don't wear another layer under them. Just saying.

Here I am getting ready. Lots of layers to go yet. 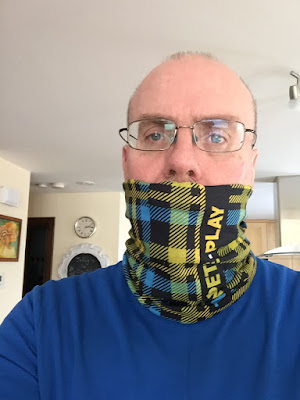 We were out for a lovely 6 K run down in Fish Creek, a bit slower than usual. We blamed all the extra layers. My run buddy was coming from an event where she had happened to be wearing makeup, and was so eager to be running she didn't wash it off. Her husband nearly giggled himself to death looking at this photo. 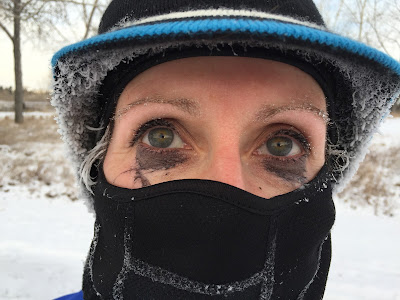 I promised tusks, and I half delivered. Sometimes I get one, sometimes two, and on one memorable occasion I had three, but the scarf was intimately involved there. 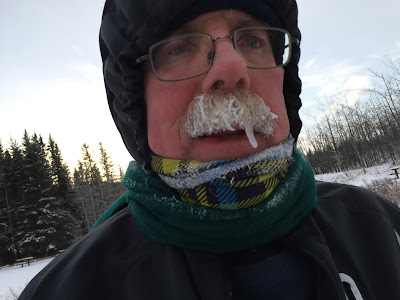 The running has been going pretty good lately. I took a bit of a break from it after overdoing it in August/early September, and I'm just getting back to consistent running again. I'd like to settle in at two 5 K runs a week, with ~10 K on the weekend, and do that for a while. I was looking over my summer run stats, and that 80 to 100 K per month distance seemed to be a happy place for me. I'm pretty sure I'm not going to make the 1000 K mark this year, but then, I hadn't planned to.

The swim has been a bit on and off as I tweak my stroke. I was doing really well, then the last several swims my shoulders and nearby muscles have been a bit cranky. Today was good, 1K long course 19:30, then 10x 100 various, and feeling pretty good after. The after swim was pretty darned good too, what with a certain water polo team showing up to practice.

The bike has been

It's still really cold here, and will be for a while yet. Maybe tougher photographers than me stand around waiting for the light to be right,  but typically not me. Not when it's this cold. Still, I saw this one coming and missed the really good light by THAT much. 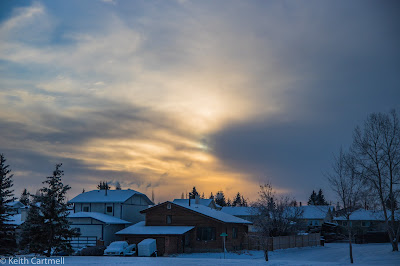