Getting soft in my old age

Once upon a time, back in the mid 80's or so I worked a job that took me outside regularly. It was shift work, which is it's own special hell, but there was one winter it was brutally cold, on the order of -40 for weeks on end. The guys going off shift would show up in the parking lot as the guys coming on shift arrived. The trick was to get all the cars running and at least slightly warmed up before shift end. Booster cables were a regular thing. We all parked so as to leave a space between the cars, or facing the centre so we could get at it from the other side. By the end of it we all knew which side the battery was on for every car, and just exactly how far away the other car could be so the cables would reach. It's only been -20 C here for a couple of weeks. We've become weenies.

In comparison today wasn't bad at all. (In the sun, out of the wind.) I was out for a 6 K run, 45 minutes. It took about the same amount of time overall to get dressed and undressed and generally ready for the run. I had to pump myself up to do it.

The sunrise today was beautiful in a subdued pastel way. There could have been some nice shots along the way, if you were willing to stand outside and wait. Nope. Not when the coffee is really good and it's warm inside and I'm not quite awake yet. Yeah I know, the real photographers would have been out there.

So the photos today are the last ones I've taken that haven't been in the blog, that is something warm. These are some bought flowers. Perhaps if we all think of the cheerful sunniness of this one, it will help bring back the warmer weather. 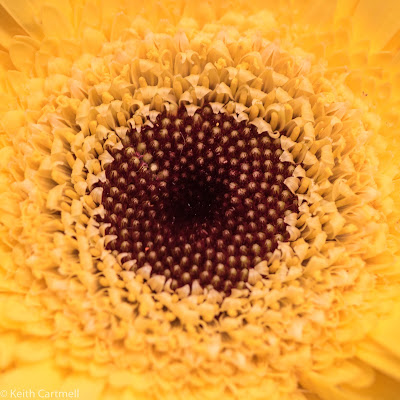 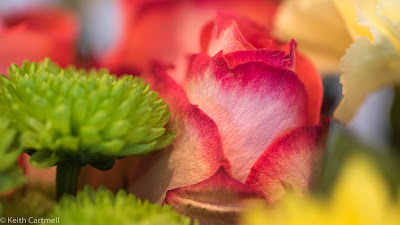