So. These two buildings. 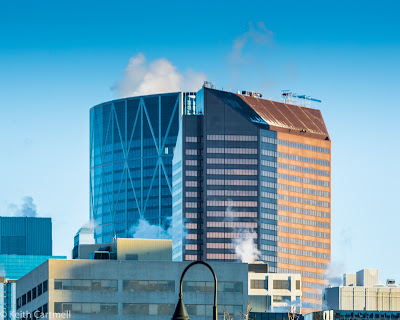 They really aren't one building, as Calgary people know. From left to right they are the second and third tallest buildings in Calgary right now. I just happened to be standing at the exact right spot for them to appear the same height.

Nor are they a science fiction movie screen shot, though the colours sort of make it look like that. In fact the one on the right is more red, and the one building face looks orange because of the light. For some people the building and it's shorter (hidden) companion are called Red Square.

But think about this. One can walk from one to the other without going outside. Does that make them the same building? In that case most of downtown is one building, because you can walk for many kilometres through the +15 network and never go outside. Which many Calgarians are happy about these days.

Email ThisBlogThis!Share to TwitterShare to FacebookShare to Pinterest
Labels: Cityscape