Today started with this. 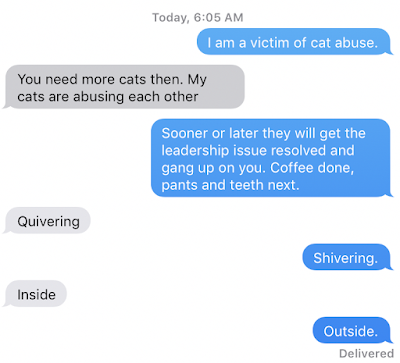 Lets start with the cats. We have two. We figure two of us, two laps, two cats. Symmetrical, if nothing else. I know many people that have more cats than laps in their house, but that is a never ending progression. There are lots of days I think we are already outnumbered. The sleepy look is just a lure for the unwary. 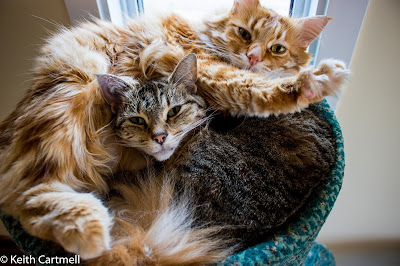 Cats can be difficult, but this is the challenge. With most dogs, everything is their favourite thing at the moment. They seem to be happy hanging around their humans. Cats make you work a little harder. People say they are aloof but that isn't true. I think they have a higher standard, and it's amusing to watch them try to enforce it on us, or our guests.

The next part there is a pickup. It's nice to make sure activities are coordinated. They were, and they are. There were a ton of kids in the pool today. I think they're warming up for a meet tomorrow, and I also think some of them snuck over into the public lanes. There were a lot of very fast "public" swimmers this morning in the nearby lanes. Still, we had a lane to ourselves to work on technique. And the hot tub of course.

I love eavesdropping on the swim kids. It's so cute in so many ways to see these guys trying to make sense of the world and their part in it. Some are in for a rough ride. A couple of them I'd totally hire if I were looking for help. The class of xxxx in Beloit College is amusing, and terrifying all at once for someone my age. For 2016, it starts "For this generation of entering college students, born in 1994, Kurt Cobain, Jacqueline Kennedy Onassis, Richard Nixon and John Wayne Gacy have always been dead." And it goes on from there. You can read the list here.

Now, for me personally, Kurt Cobain was never alive till he was dead, and I recall a buddy several years older than me trying to explain who he was upon the occasion of his death. Much of the rest of the list is an uhuh, I get it. Others I missed the first time around, and don't get it any better now.

Last night I watched North by Northwest for the first time in a great many years. This is the first and only time I've watched the whole thing at once. Other times the tape (yes the tape) got popped out or I got dragged off to do something else. They've remastered it for blu-ray and it looks stunning.

It was released in 1959. Let that roll around in your brain for a little while. What I love about old movies is the stuff nobody thought of back then. I love to look at what people are wearing in street scenes, what the cars look like, the prices on signs, the topics of incidental conversation. I didn't pause the disc at any time to look in detail, but enjoyed this view of a long gone world. Most men wore hats of various styles. Almost all the men in the movie are wearing suits in a natural unselfconscious way. Almost everyone is slender. Televisions in rooms are an after-thought. The cars are huge and ungainly.

But the other thing I noticed was how long the scenes are. At one point the Cary Grant character is standing at a rural bus stop. Waiting. Looking around. By today's standards that scene lasts the better part of forever. One of the 'making of' clips said it was 8 minutes long. No movie maker now would even film that, let alone put it in a draft version of the film for audience feedback. I find many movies now to be difficult to watch. They cut so often I don't even know who's on screen, let alone what is going on and how it relates to what has already happened.

Yes, the effects in these old movies are cheesy. They aren't the point of the movie. They are the result of the technology available at the time crossed by the budget of the film. Besides, if you've done the movie right, people shouldn't notice the effects. A movie done to show off the special effects might be interesting from a technical perspective, or useful for film students, but it's likely to be a boring movie. Avatar, for example. That was a total snoozer and I'm glad I didn't pay to see it in a theatre.

Hitchock was a master of suspense. He gave the audience time to wonder what was going to happen, if the character was going to figure it out or not. Then the payoff happened. Now directors go directly to the payoff, and it's boring. I don't care how you do the chase, if you don't care about the characters, you won't care why one is chasing the other, or if they get caught or escape. Hitchcock gives you time to sympathize with the Grant character, then you care about the results of the chase. And by the way, for those Beloit college students, the female lead Eve Marie Saint is still alive, but Cary Grant has always been dead. More's the pity. George Clooney is good, but Grant is better.