The world is trying to kill you, but

This post isn't meant to be a downer, or morbid, but it is serious.

Our next door neighbour died yesterday evening. I don't know the exact sequence of events or many details, but he was found on his front steps. Did I mention it's about -20 C out, or colder? They suspect he had ducked out to plug in his Christmas lights or sweep the steps. It doesn't matter if he had a heart attack, or a stroke, or slipped and fell. The end comes quick at these temperatures.

As I was leaving Repsol (Talisman pool) this morning several of us noted the air ambulance helicopter flying south. Never a good sign. Going south on 14th, I saw a couple ambulances heading north with lights and sirens going. Then as I turned from 14th St to Anderson road I could see a huge traffic backlog and several emergency vehicles. My side of the road was empty. There were at least 5 banged up cars, another ambulance, several cop cars, and a firetruck. I'm pretty sure that someone wasn't paying attention and triggered a chain reaction series of collisions. That's happened there a bunch of times over the years.

You'll notice I didn't call it an accident. Someone demonstrated their incompetence at operating a motor vehicle. I've done several ranty blogs about the cost of poor drivers. At the very least a bunch of people have had a very bad start to their day. Several people are in hospital, and if the air ambulance attended that scene, at least one is in life threatening condition. They don't send the helicopter for cuts and scrapes, or even broken bones.

In addition, there are several teams of highly trained people tied up dealing with it, along with their specialized equipment. Maybe they would have been sitting around playing cards awaiting a call, but I doubt it. Then there are all the people stuck in traffic, running late for whatever their day is, a widening ripple of lost productivity spreading across Calgary.

So unnecessary. I've ranted elsewhere about what should be done. (Car simulators for driver training and competency checks, assignment of blame with attendant costs, and removal of driving privileges for substantial time, as in years.)

My point today is that even though we live in the safest society humans have yet created, death still walks among us. The world is still trying to kill us every day. Some people make it easier than others. They smoke, don't exercise, eat poorly, or engage in risky behaviours like operating a cell phone while driving. Others, like those poor drivers today, are in the wrong place at the wrong time. Even if you see the rogue driver coming there might not be any place to go to.

We don't need to be helping the world at this; it's efficient enough. Pay attention to what you're doing! Be mindful. Consider the impact of your actions on others. Yes, I know that's harder for some. Even if they aren't driving a BMW they think they deserve to be, and the real arrogant ones are channeling Donald Trump. We all have to share the public space around us. It doesn't matter if it's a road, a parking lot, or a mall walkway. All of us are stressed, especially this time of year. We all have places to be, people to visit, stuff to get, and we're likely running a little behind.

It's a trying time. Many thousands of people are desperately searching for work, and that's tough sledding in the current economy. Even the ones still working are worried about losing their jobs. The American political sewage is seeping north, infecting some of our politicians, though that's a rant for another day. Lots of people are seeing their retirement dreams drowning in the housing market. I don't think the coming year is going to be much better.

But you and I, my dear readers, all several dozen regulars of you, can make a difference. We can. We can choose to be nice to our fellow humans. We can smile instead of frown. Say hello to that stressed out store clerk, and have yourself organized to make life a bit easier for them. You think it's bad enduring the retail scene for a few hours, but they're in it for weeks. Cut them some slack. Let that driver in. Wave at the ones that let you in. Most of my readers are healthy active people, so take the furthest parking stall. An unexpected bonus is that you're less likely to get your doors bashed.

Leave a little extra time to get somewhere. My rule on this is that if you leave a bit of extra time you'll catch the lights, you'll get that primo parking spot, and you won't have any trouble finding the address you're looking for. Run late and it all goes wrong.

There's a new agey saying about not being able to affect what the universe sends you, but you can affect how you react to it. That's true as far as it goes, but really, consider that you are part of the universe that is sending out stuff. Send shit and you're making someone else work harder at dealing with it. Just saying. Feel free to forward or share if you like, and I always love comments.

Here's a nice peaceful winter scene in Fish Creek to help you chill out and relax. 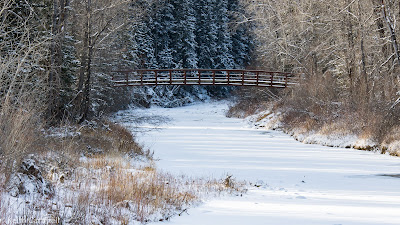