The oddest things catch my attention some days, and yes my faithful blog readers, some days you don't want to know. Today is not that day.

Many of you may have seen pictures of the Peace Bridge done by Neil Zeller. In fact, if you've seen a nice picture of that bridge, it's quite likely one of his. He takes great pains to avoid getting the nearby rocks in the shot, even though he has to scramble over them on a regular basis. In fact, it's so regular he's probably on a first name basis with some of them.

A while ago on Facebook he posted a shot that included the rocks, and some comments. A crane got involved in the discussion as well, but that's neither here or there for the purposes of this discussion. A couple days later I was down there in the afternoon doing some shooting, and went to a bit of trouble to get this shot, featuring the free rocks. (Yes, I got several of the crane too, but today is about the rocks, not a crane. So quiet, you crane enthusiasts in the peanut gallery.) 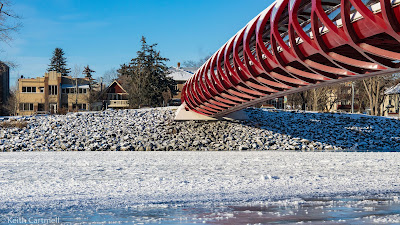 A little later I found these caged rocks. Poor things, doomed to spend a significant part of the rest of their lives imprisoned in a wire cage. Normally I'd say they must have done something bad in a previous life, but that's a hard concept to apply to rocks. Even if they might be bad characters, I think they're beautiful. 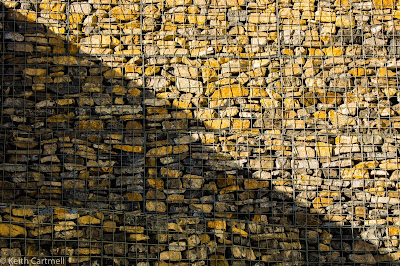 The technical word for this cage is gabion. You see, a new word for you, just another reason to visit my blog regularly. They don't dump the rocks in higgledy piggledy, somebody had to place them just so, to show off their good sides. Having built some rock steps and a rock retaining wall from slate, I know how hard that is. For a while I didn't have any finger prints at all. I'd worn them off handling the rock so much.

We were watching a Miss Marple the other night, 4:50 from Paddington. In one scene a young woman pushes aside a rock slab about 6 or 7 feet long, by 3 or 4 feet wide, by several inches thick. You can guess what she finds under it. You see a similar thing happen in many other movies and TV shows.

We have a rock about 5 feet x 3 feet in our patio, and I know for a fact it weighs 500 pounds. Even sliding it around a little when it was the top step was all I could do. Upon delivery 4 men carried it into position. When it was moved quite a while later during the back yard reno, it was moved by forklift. It's a very nice rock, and they were careful not to damage it. Now it's the front step to the lodge. 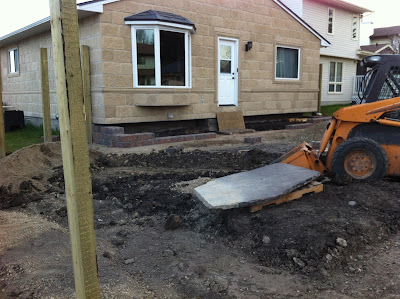 There it gets swept and shoveled regularly, along with the other patio stones. I've even washed it. Yes, with a pressure washer and a scrub brush in one spot to remove the polymer from the sand in between the stones. Never let it be said our rocks aren't cared for.