I'm still in love with Calgary's skyline. There are any number of spots where one can get photos of it from almost every direction. Depending on how you count the bluff just north of downtown, there are half a dozen spots at least you can get stunning shots if the light is right. The shape changes so dramatically depending on exactly where you stand, and sometimes just moving a few feet one way or the other will totally change the shot. Sometimes the tower is coy and hides behind other buildings, other times it's out there proud and lonely.

It's almost like shooting something new every time. The angle of the sun changes with the seasons and the time of day, modified by the weather of the moment. A pair of photographers right next to each other on the same morning might produce very different photos.

As an aside, for extra credit, the new LED lights on the tower look very pretty, but they sure complicate the life of a photographer. Normally when shooting skyline at night, you can open the lens fairly wide if you want to play games with field of view, and let the exposure go long, in order to get the ISO low. This reduces the noise in the photo and makes the background look nicer. For most of the buildings the light doesn't change much. Even a whole floor of lights turning on or off isn't a big deal. But those damn LED lights change second to second. To catch that and look perfect you need a really short exposure, driving your ISO up and limiting your choices with the lens opening. So for example, if you look really closely at the tower in the first shot, you'll see the lighting looks a bit odd in places. It's an HDR shot, with the 3 exposures of .5, 1/5, and 1.3 seconds all mixed together. I chose to have the LED lights come out a little odd, because it gave me the rest of the image that I like, and the tower lights are a pretty small part of it. Just an example of how when you look at a photo, you aren't seeing reality, you're seeing a photographer's artistic impression of reality.

The first two were shot solstice day, the next two shot the next day. 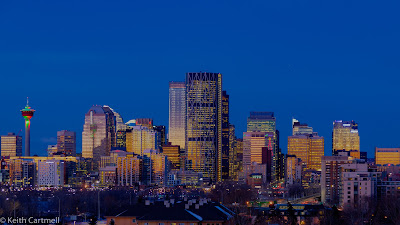 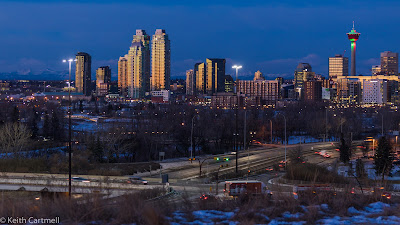 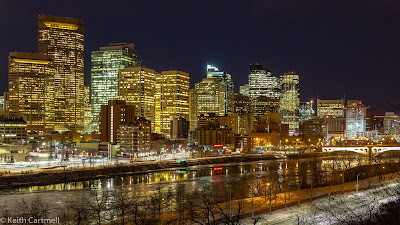 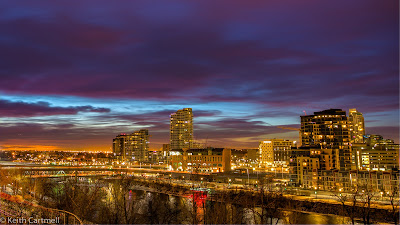 For me the interesting thing about skyline shots, besides the artistry of the light, is figuring out exactly where it was shot from, and what lens was used.

Do you like skyline shots? Why or why not?