Decorated, Front and Centre, at last!

There's one building downtown that always seems to be on the edge of my composition. Sometimes I'll change the shot to avoid it, or to include it just on the edge. It's important to me in one respect, but it's never been prominent. The importance is the text of the name. If it's in focus, everything else will be. So at last, here it is, full frontal, showing off the decorations they put up. The candle flame flickers back and forth. Very nice. 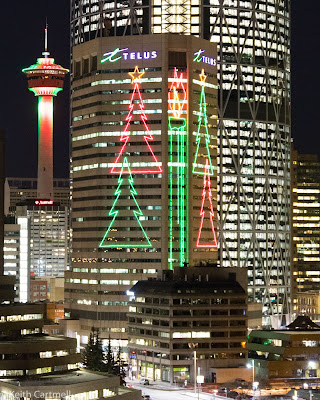 Today's shoot went much better. Either my eyes were working properly, or having only a light wind made the difference. I got lots of shots to choose from, including sunrise, skyline, bridges, tail lights, and reflections. Since I was after sunrise today, here's a couple of them. The oranges and reds were really quite lovely, but really low on the horizon. I managed to get the big lens on it in time. 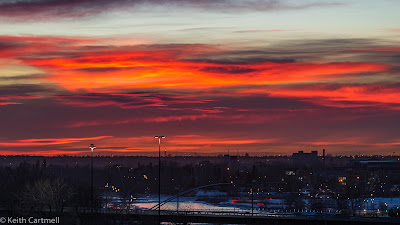 Then  a few minutes later with a wider lens managed to catch the purple reds. I'm getting better at changing lenses on the fly. I'm glad I was paying attention. The reddish purple was only there for a minute or two. 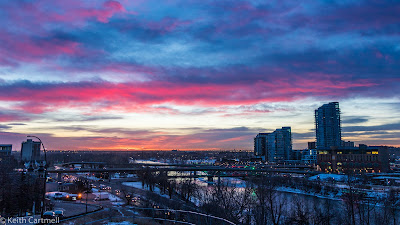 The good part about heading home is I got the last 4 La Boulangerie cinnamon buns to have with coffee after we sleep in tomorrow. Linda is now on vacation till next year. We ARE sleeping in tomorrow.

The not so good part, there was traffic rage. Mid-morning, not even rush hour anymore. It's common here to see at least one driver being a jackass during any but the shortest drives. The worst today was a guy jumping out of his truck to shake his fists and yell at the guy behind him for no reason I could see, and I'd been driving along with them for a while. Lots of other aggression out there, especially in parking lots. Be calm, be safe.