Loved it! All the way through I was watching and enjoying, but also watching how they put the story together, trying to figure out the twists and turns. Now that I know how both seasons turn out, I want to go back and watch season 1 again.

My Facebook peeps know I was struggling with a sig file. Firstly, my signature. The actual ink and paper one. Not the initials squiggle I developed when I had write my initials dozens of times a day. The actual signature. Mostly it starts with an almost legible Keith, then usually there's something resembling a C and it sort of peters into a scrawl out after that. (No comments from the peanut gallery that actually know what my signature looks like.) Clearly that won't do when you want people to be able to mostly read your name on a piece of artwork.

You know how when you say a word over and over again it suddenly loses it's meaning, and you're wondering if you're even pronouncing it correctly? Today's the first time that's happened with my last name. Eventually I got it about where I wanted it, then signed on a blank page. Note to self, I should have fixed the white balance in Lightroom before doing anything else.

But no, I exported to a PNG file and tried to open it in Photoshop to get a transparent background. Holy Doodle, that was frustrating! There was cursing and swearing and general grumpiness. Before I ever try to do anything in photoshop again, I'm going to get someone initiated into the inner mysteries give me an introduction. Clearly there is something very basic that I'm missing.

Preview, of all things worked. I tweaked the settings to make it more black and white, and did something, and inverted the selection or something like, deleted it because the instructions said so, but it didn't delete the file only what I wanted gone, and saved it, then created that file as a water mark and told Lightroom where to put it, and experimented on an image and it all turned out pretty good, I'm told by several people who's opinion I trust. Whew! This will work till I get an image that's very dark, when I'll want to have it in white instead of black, but by then hopefully some kind person will help me through that, so I'll have it when I need it. Probably if I'm smart I'll do it in several different primary colours, just in case.

All in all, after a nice run inside at Repsol, even though my phone lied to me about how far I went (unless my running has dramatically improved overnight practically), and some frustration, it turned out to be a pretty good, even if it is WTF cold out. But you knew that already because I had said I ran indoors.

Here's another Fish Creek photo that also turned out pretty good. And no, it doesn't have anything to do with the rest of the text above. At least I don't think so. 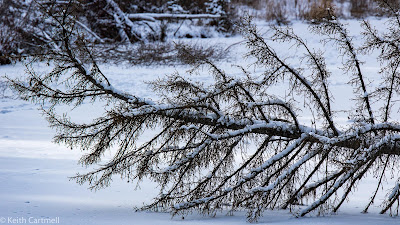