Our cats are photogenic, but very strange in one regard. They don't like canned cat food. Or more accurately, they don't like it now. They want crunchies.  They in the past have liked this canned food, and happily snarfed it. No matter. We try telling them all the other cats in the world would love to have this wet food. No matter. We try telling them if they eat it they will get crunchies, and there isn't that much and they'll still be hungry. No matter. Some days there's a catly funeral procession from the bowls to the front door, where they look longly at the door opening mechanism.

Generally the cats tell us four things, and three of them are in two part cat harmony:
-Pay attention to me.
-Feed me.
-You are rotten humans.
-Let me out, there's a hot buttered mouse out there and I want to hunt it. (This is Curtis.)

Lately there's a new story. The cats ignore the wet food. We leave. I come back fairly soon after a swim, or a run, or a photo trip or whatever, and the food bowls are empty. The cats deny eating it. They say trolls came and ate it, and feed us crunchies now we are so hungry. Yeah. Trolls.

Celina telling me about the trolls. 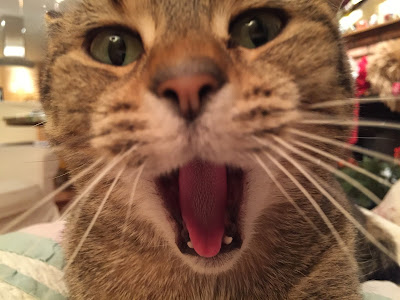 And Curtis, wanting out to hunt his mouse, wondering how he managed to be stuck with the stupidest humans ever. 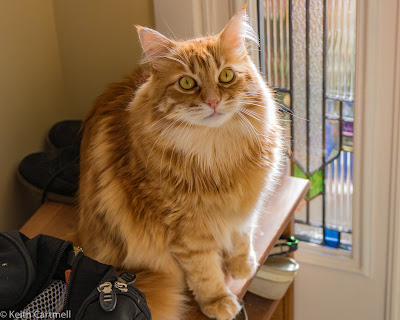 What do your cats tell you?

In other news, iSmoothRun doesn't deal well with the indoor track at Repsol. It tells me all kinds of strange things. Like a 17 m climb on a track that is probably within a cm of being dead level. Or that the track has a dog leg that goes out to visit the nearby river that I take every now and then. Another branch goes around the pools. Today I called bullshit, and timed each lap separately with the stopwatch, while iSmoothRun ran in the back ground.

This is the map of what it thinks I ran. If you believe this I slogged through the competition pool and dive tank on each lap. I never left the outer lane, and this is a tight grouping compared to some I've seen. I'd always thought it was pretty accurate outdoors, but now I'm wondering. 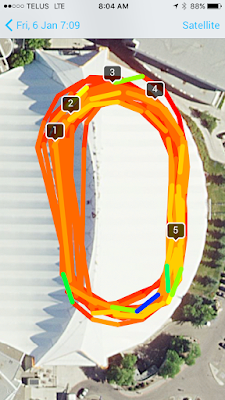 As I was doing a cool down walk a whole herd of fire fighters showed up. They had to run 1.5 miles for some kind of test. I don't know what their goal time was. A couple of the guys were obviously runners. Most of them ran like they were thinking about it, aiming to beat the pace time, but not kill themselves doing it. I timed the slowest in that wave (she had a pony tail so it was easy to track) and she was way faster than me. Glad to see our fire fighters are fit!