I've always believed that we should take some time out of our busy lives to just sit. Except, this isn't really time out of your life, it's time in it. What's being taken out is the busy. 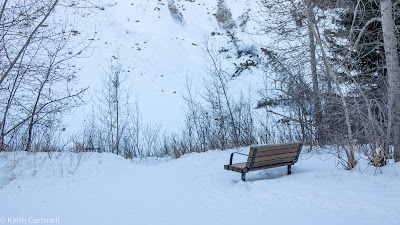 I found that bench during a walk in the park yesterday, and almost didn't photograph it. To all appearances in life and in the photo, it faces a cliff that right now is covered in snow. Why would someone put a bench there?

It turns out there's a creek just out of sight. I think it would be quite pretty in the summertime, and I intend to check it out once the snow is gone. Even today I was tempted to just sit there for a few minutes to enjoy the quiet. Alas, some kids on fat bikes were approaching, and as kids do, were making a lot of noise enjoying themselves. Plus I had to get back to the car for a date with some Indian food and I wasn't sure how long the walk was.

Our lives are an onslaught of information, some signal, some essentially noise. It can be difficult to sort within even just the signal, trying to find what's important and urgent, or at least important to pay attention to, let alone all the noise. There's a certain amount of stress involved, and it builds up over time.

This is why I've loved having days off during the week through my so-called career. I would sit and read for a little bit, then put the book down and close my eyes. I might or might not have a cat purring nearby. Not to sleep. In fact I was sometimes more awake than with my eyes open.

In one sense I wasn't doing anything, yet in another I was doing everything. I would sit, and breath gently, and let my mind go where it would. Think whatever thoughts might come, and flit from thought to thought. Gradually the thoughts would slow as I paid attention to them, then dismissed them. I'd listen to my heart beat resonating through my entire body, feel my breathing. I'd let my body relax into the chair, yet keep my head balanced on my shoulders.

I would picture the stress, the cares, the concerns, the worries, all draining out of me as if rainfall was washing them away. Once I did this on a beach, feeling the gentle waves come and go, taking the stress away. I'll never forget that. After a while a feeling of peace and serenity will come. I feel relaxed and calm. Energized.

This morning I took a chair along with the camera on a tripod. The theory was to catch the moon rise coming up out of the sunrise, but I looked at the moonrise time for yesterday. Oops. Today it was only a few minutes before sunrise and the moon was buried in the light.

There I was with the camera dialled into the pre- sunrise, clicking the remote every now and then. Thinking quiet thoughts. There wasn't much traffic really, mostly my neighbours commuting to work and busses picking up school kids. Somehow they didn't seem as noisy as usual. I was thinking how calming it was, how quiet I was. Yet buried within that serene picture is the epitome of business, an airliner preparing to land. All those people on their way somewhere, some of them late and frantic. The pilots going through their checklist, making an extraordinary thing look like a routine task. Can you see it? I could, then I let it go. You do the same. 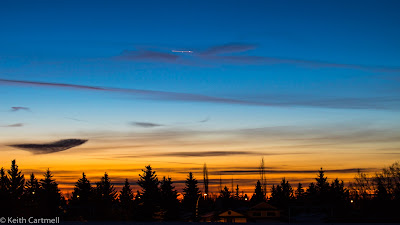 Isn't the sunrise calm and beautiful with oranges and reds, and the deep blue above? 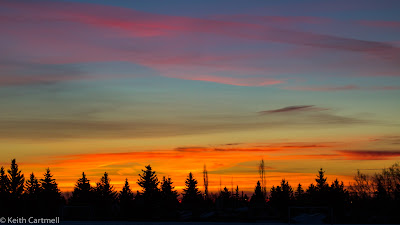 A little later some purples showed up and I captured that and thought of my buddy Susi who loves purple. Such a vibrant colour usually, but isn't this soothing? 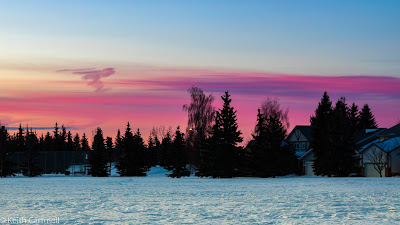 It was a bit cold, but I was dressed warmly. It wasn't quite as relaxing as the beach, I admit, but something about the crisp fresh air, and watching a beautiful sunrise made this serene. Afterward I came in to edit the photos, and started puttering about my day.

Oh, before I forget. The Indian food was at The Clay Oven. They moved east just a little bit so you have to get at it off 27th St, not 26th. The new place looks fabulous, and the food is even better than it was before. I seriously believe this is the best Indian food in Calgary. We always get an extra dish, and plan to bring some home to eat later. Three guesses whats for dinner tonight and the first two don't count.