Here's a tree. This is one of the many shots from the photo weekend, and one of the few that ended up in colour. These misty hazy cloudy days are perfect for B&W. 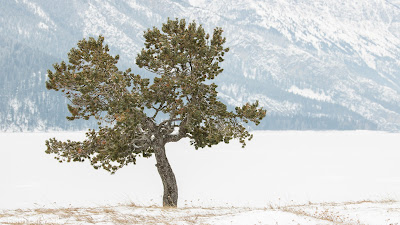 It looks all by itself, doesn't it? In this photo the nearest trees look to be across the lake, but in fact there are trees a few yards out of frame.

I've no idea how long it's been growing there, blasted by the winds howling through the Waterton valley. The soil probably isn't that good, and rainfall is erratic at best, so it's probably a pretty tough little tree. Somehow the seed got planted and here we are.

Even though it looks alone, it's still part of the overall ecosystem. The roots go down into what little ground there is, helping to keep it from blowing away. It's probably sending little tiny rootlets into the cracks in the rocks below, eventually breaking them down into soil. There might be birds that shelter in the branches.

People need a little bit of distance as well, yet are part of an overall system. It isn't good to be wrapped up right against another person; you'll hamper each other's growth. Nor can you be too far away, totally exposed. Like so many things, it needs to be somewhere in the middle, just right.

We need to be tough enough to carry on in the face of whatever comes along, no matter how hard the struggle. The tree doesn't know any better. Eventually it will die and the nutrients will return to the soil. People have a choice, they can struggle on, they can end it all, or they can change the rules to some extent. Unlike the tree we can uproot ourselves and search out a better place to be.

There are lots of times I'm baffled by the choices people make. Supposedly we all make the choices that are right for us, but sometimes I wonder. There are lots of people that lose everything and start over; what else can you do? Other people are afraid of losing some fraction of what they've got, so they continue living next to a toxic waste pond that they know is poisoning them. Lots of people make really short term choices, ones they know they are going to regret sooner rather than later.

It's the resolutionista time of year, but I've already said I don't do them. But I do think about what I could do better, or stop doing. Here's a couple more things. I'm dialing back on Twitter. A social media platform that enables abuse doesn't deserve our support. I'm back to just the people I actually know, and two curated lists, one for writing stuff, and one for photography. Even then I might not get to it every day. I've stopped looking at the news, and I'm getting better at ignoring click bait headlines.

Facebook is a little trickier for me. There's lots of use in it, and it's my main platform. Still, I'm not going to put up with stupid. People can say whatever they like on their wall, but I'm tired of putting up with their stupidity splashing onto my wall. I've unfriended a few people, and a couple more are on the line. I don't have the Messenger app on my phone, so I see only part of it.

I've been on Instagram for a little while, and the jury is still out. The workflow just isn't natural for what I want to put there. For instance, take a picture with the good camera, chip into the desktop and develop the photo. Air drop it to my phone, then put it on Instagram. Sharing a photo taken with the phone is easy, it's just that usually they aren't as good as they could be, and that's frustrating.

LinkedIn has been ignored for 4 months. I suppose I should go look at it and see if anyone wants to connect.

Last time of calling for seeing the AMA answers if you have been meaning to go back and finish. And if you somehow missed the most popular blog post since some time in the summer, you can read about the latest Neil Zeller photo workshop here.