There I was, determined to run outside. Best run buddy ever and I were discussing the need for pants. Long or short, get your minds out of the gutter! In the end we both went with long. I brought a jacket just in case, and that turned out to be perfect. There was a bit of a breeze blowing off the reservoir, at just above zero. In the end we did 6.7 K in 50 min, nice and easy.

It was lovely for the first outdoor run of the year. We're in the middle of a chinook right now. That usually means wind and warmth, and today was all that. I don't think it got up to double digits, but I was just outside shooting some sunset, in a T shirt, and was fine for a while.

During the run I first saw a woman with a big lens point it up into the trees. A photographer birder, or a birder photographer, whichever is right. Then another guy carrying a big lens in camo. Then some people set up with a 500 mm lens, he said as we passed. We probably ran past a dozen people carrying big expensive lenses. I wanted to chat, asking what they were looking to shoot, but carried on with the run. Every time I see someone with a good camera now, I want to look and see which camera, which lens, and chat to them about what they like to photograph. So far I've met the nicest people.

Remember the house photos I mentioned? I was going to take a photo a day and see what the chinook winds did? That was starting last week, but I was somewhat disappointed that the snow didn't disappear faster. Here's the first and last one in the series. 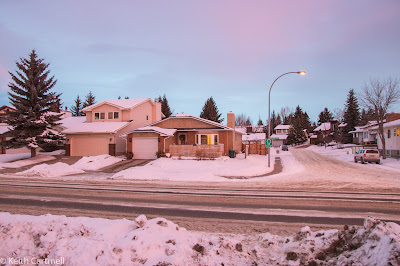 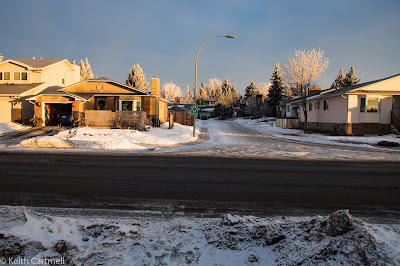 Often during chinooks there is a classic arch of cloud across the sky, with the clear blue bringing sun and wind to blow the cloud away. It was a bit messier today, but I was trying to get some shots of the interface, and this happened almost by accident, a panorama of 5 shots stitched together. This is the social media version, and you can't zoom in too far, but the print version, wow! Anybody looking for a wide print to fit that odd space in their house? Proportions are about 1 high, by just under 5 wide. I'm pretty sure it would look great at 10 inches by 4 feet. Let me know.

Plus during a chinook we get lots of water running in the street, and bits of ice all over the place. Like this. 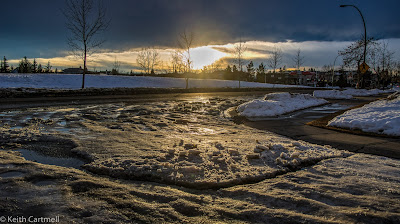