When I started this photography thing, I was mainly focused on the camera and getting the shot. Then thinking about Lightroom to tweak the best shots. It hadn't occurred to me that the shots would pile up and it would be nice to be able to find them again.

I've been going back trying to apply keywords in an organized fashion, and consistently rank them by stars, and indicate which make up HDR shots. Consistently, that's the word. My thinking was that I'd see what I got, and choose keywords accordingly. Here's part of my list.

Some of them are used lots. Some less so, and maybe I don't need them. It's easy to get carried away. A simple example, a photo of a rose bloom. It's a flower, it's a bloom as opposed to the hips or thorns, it's in our garden as opposed to someone else's, it's red as opposed to pink or yellow. Which of them should be keywords? It's really easy to start, then realize you've goofed and have to decide to live with it or start over.

As I was going through I found this image below, and realized I'd somehow edited it, and never marked it or put it on the blog. Nobody but me has ever seen it. I've given it 5 stars, meaning it's one I'd show someone who asked to see my best images. Now it's marked as a sunrise and a cloudscape, so if someone asked to see either of those it would show up. 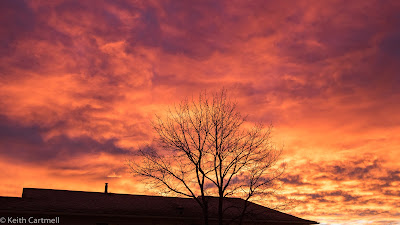