New skyline from an interchange to be

They are picking up steam on the SW ring road that will pass near here. It seems every time I'm out for a drive I see more stakes, and changes related to the pending construction. 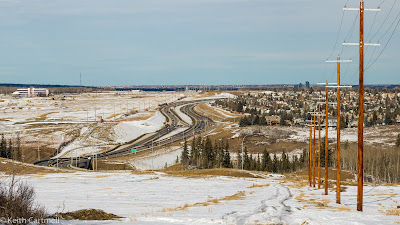 This view didn't use to be like this, but they've cut down a small bush and opened things up. Where I'm standing is going to be an interchange, if I understand the drawings correctly. Off to the top left is where the road is going to go, and there's been lots of changes on the Tsuut’ina land in preparation. At least the bottle exchange is open again.

Now you can see skyline from there. 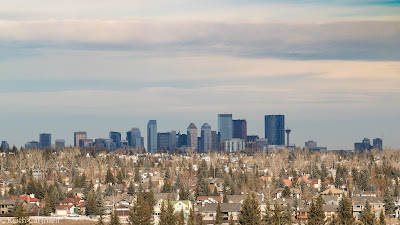 I checked out the view a little further along, even though the light wasn't anything special, and found these. I'll have to visit again when the light is better. 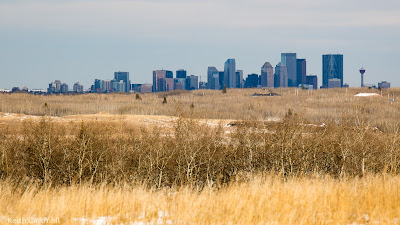 For my photo buddies, dealing with the blue was tough in these two. I had to do considerable tweaking in Lightroom to try to both bring out the detail in the sky, such as it is, and not make it look like the ocean floor.

There was a swim meet at the pool, so we tried to get in and get it done. After racing me with fins (Michelle insisted I put that detail in) last week and keeping up, she want to do a longer race, and try to keep me from lapping her too often. Normally we split a lane, but today we circled. This was fun! I had a great swim, passing her several times, and as expected each time she pushed herself to make it harder for me.

We both ended up with record times! My previous best was 18:04 and today was 17:37, short course. That is about 106 seconds per 100 m,  or 1:46, which is a huge breakthrough for me. I haven't swum that fast since I started swimming again back in the early 2000's. When I was swimming in the mid 80's, I'd routinely do this, and if I worked I'd be under 17 minutes. This is what happens, though. You get stuck on a plateau. At first it's work to be there, then it's the regular thing, and if you let it, that's where you'll stay. When I was trying to break 20 min for a K, the first time I did it, I just barely made it and nearly puked at the end. Two days later I did it in 19:30 and kept on going. Now I know I can do it, I need to keep pushing.

Michelle took a minute and a few seconds off her time for that distance. Yay!

Another buddy came along and worked on some really basic stuff, and exceeded my expectations. We will be seeing front crawl soon.