On Monday I gave you a choice of two really similar bridge shots. Some of you played along in comments and other communication. Thank you for your preferences, and for the ones that commented about why it was their preference, thank you ever so much!

The original was deliberately composed to have the bridge deck in a certain place in the photo, right along the top third line. It only took minor cropping to do that. In that sense it was a success. However, it didn't make for the best photo. Several people suggested the mountain behind the bridge was more interesting.

So I took the exact same photo, and re-cropped it to show more of that, and not worry so much about where the bridge was. Nothing else at all changed between the photos.

And ta da! The second photo won 7 to 3. Thanks again for playing along.

The lesson for me here is not to get too hung up on composure rules.  Rather, look at the scene and see what is compelling that makes the best shot. Humans are notorious for seeing what they want to see, and I was focussed on that bridge.

In novel news, a germinating idea burst forth and I pounded away on the laptop for a couple hours to capture it.

Here's another black and white from the Waterton trip. 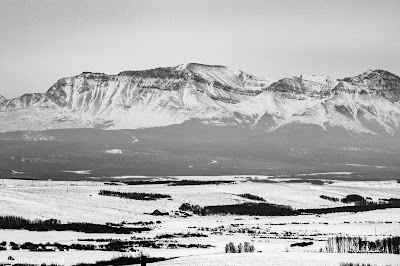