Mountain, zoom, not B and W, but almost

Yesterday I posted a B&W shot of a mountain as seen from the Ink Pots above Johnston Canyon. I've been editing more of the photos today, in between a busy swim, and fun coffee date with buddies, where I drank a superb decaf mocha. Oh, what the heck, it's really pretty, probably the nicest ever looking cup of coffee I've ever had. And you wonder why I don't go to Starbucks. 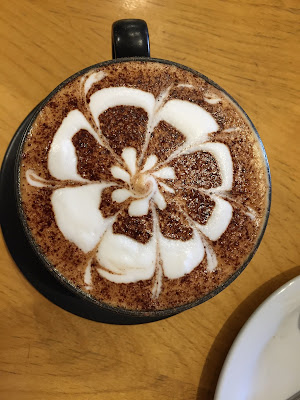 This shot is a tiny subsection of that shot. For the photographers out there, yesterday's was at 70 mm with a crop sensor, todays is at 200 mm, handheld. 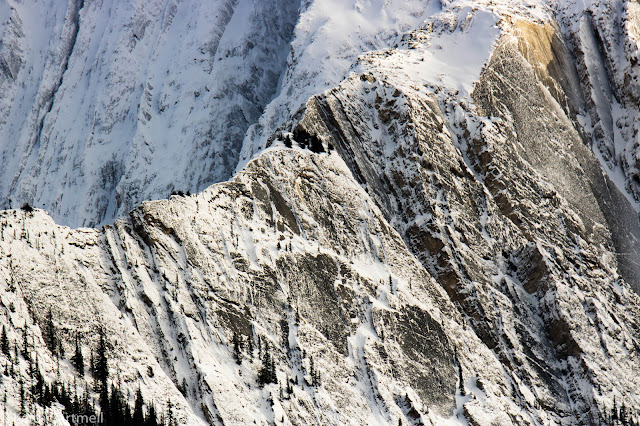 If I were a real imagery geek I'd put that other image here, with a tiny square and the four lines indicating where it came from. But I figure my readers are smart. If I tell you it's from near the centre, the ones that care will find it and marvel at the zoom. The ones that appreciate the textures of rock and trees will do that and move on.

Yes, it's an odd shape for my photos. Thank you for noticing. My normal pattern is to crop to 9x16, and portraits go to 8x10. Sometimes the photo will demand a different crop for some reason. This one? I couldn't bear to cut any of it out. Plus, cropping much of it out will have the effect of zooming in further and I think that starts to degrade the image quality.

Still, I can't get over how many trees there are, clinging to what must be a tiny patch of soil along the ridgeline. That's mother nature's tenacity for you, trying everything and seeing what works.

In comparison, here's what it looks like at 20 mm. The light was kind of flat while we were there, and looked like it was clouding over more as we waited for nicer light. By the time we got down it was clearing, and was mostly blue sky on the way home. Perhaps had we waited even longer... 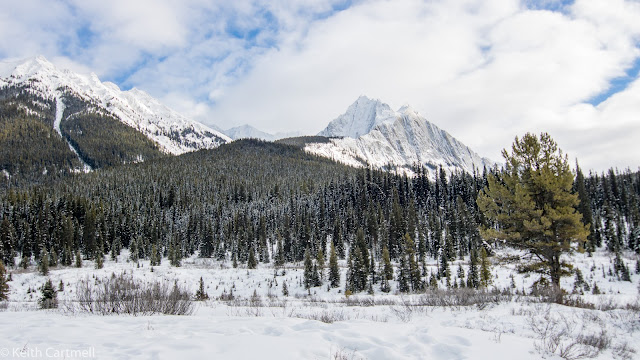 My buddy Sean also has some photos from the day on his website. I haven't got around to do the ice falls yet. Stay tuned.

This was one of my best photography expeditions, and I'm so glad Sean suggested it. Normally the trail is really crowded. On the way up we saw about a dozen people, including a couple of women older than us who skied up. Good for them! Just walking up had me sweating hard, and I wouldn't want to think about up or down on skis. And yes, it totally went into the fitness tracker!

The way down was different, we saw lots of people, some of whom were barely dressed for the weather. I would not be surprised to hear that some of them had some slip slide adventures along the way, even on the lower portions of the trail.

I mentioned the mini-crampons I bought, and I can't say enough about them. I walked on sloped ice like I was in running shoes on the street. Up and down steep hard packed slopes, steep like a set of stairs with the snow completely filling it up, felt perfectly secure. And the best part? If you wear one or several of the individual cleats, you can buy a replacement package from Lee Valley Tools, and replace them as needed. If you look closely, they are a hex bolt with the centre hollowed out by a drill. $50, and a great deal. I might actually run with these on my shoes when it's icy out. 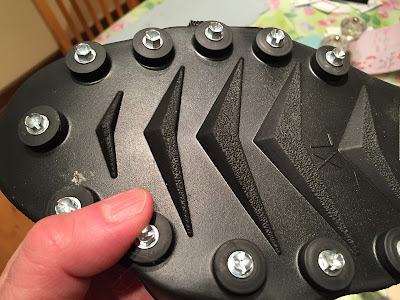 In other news, none of you will be surprised that I didn't run today. Swam instead, mostly pretty easy, except for when the guy in the lane next to me tried to race me. Put him in his place. And the woman I was sharing the lane with, wearing fins and working hard, tried to race me and mostly kept up to the swimming part, but I do my flip turns way faster. Gotta work on that core!