February Image of the Month

Here we are again. Another month has zoomed by, this one with more zoom than usual. I feel for my friends at home, this month has probably seemed to last forever and a day. Or more. I can't believe it's over already.

I took nearly 5,000 photos last month, with about 10% of them edited so far, and yes, I'm still behind. The first train trip was about 500 photos, I think. Parade day was over 1000. Neither touched so far. I had a hasty scroll through, and I don't think I'm missing a potential image of the month in either. Maybe once I finish editing I'll have to do a honourary New Zealand image of the trip, or something.

I admit to struggling with all the images. Without doing anything else, I could put up a photo a day for the rest of the year, and still have some left over. I could do sets of things, or by location, or kind of shot, or, or, or. The driftwood, for example. I'm quite taken by it, but my small and loyal readership don't seem to be much interested in it. Maybe that needs a different audience. I see lots of shots that by my standards are pretty good, and would normally be a shoo in for the blog, but haven't been included for whatever reason, usually because there are even better ones.

Today I was looking at these amazing landscapes in a gallery. Amazing is an understatement. It makes me re-evaluate all of my own work, but it also gave me ideas. Hint, Google Helmut Hirler. He's really nice. We chatted about photography, and he autographed his book I bought.

To be honest I don't even know where to start deciding. I went back and tweaked the star ratings (what was I thinking for some of them??!!) and am reasonably happy with the results. But as always, I'm having a problem getting it down to one.

I'm glad I kept notes along the way. Some things are beginning to run together on me. I can easily see that when I'm going over these on the desktop, I'll need to have my notebook open beside me so I know which beach, or city, or garden I'm looking at.

Second runner up
This panorama was shot from the balcony of our rental place in Cass Bay (near Christchurch) overlooking Lyttelton harbour. The rest of the sunset was nice, and I was there with camera in hand when this came and went.

First runner up
Shot near Wellington airport with the 14 mm lens. For those that missed that blog, this appears to be a sound I could run tours down, but really it's only a few inches across. 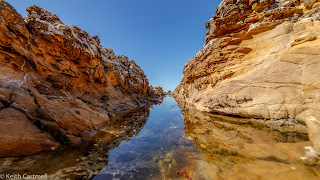 The winner!
This was during our stay just outside Napier, when I drove out north of Sherendon, hoping to find dark skies. There I was, driving along the ridge I had scouted earlier in the day, and was horrified to see the lights of Napier way down below. Going a little further got me in the lee of a hill, and once the moon set things were pretty dark. 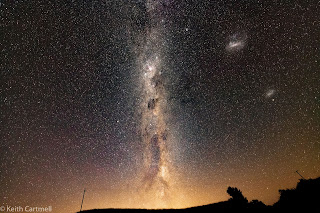