Yesterday evening I approached a man in a white coat and handed him a piece of paper with some squiggles on it. He looked it over, said he could do it, only take a few minutes to get ready. He bustled about doing his thing, and soon I was sitting there while he jabbed a needle into my shoulder.

Think about that for a few minutes. I trusted a stranger to stab me with a needle to inject a substance I know very little about into my body. Why?

Firstly, I don't want to get shingles. My former office roomie Jason had shingles in his eye. He said that it was the most painful thing that has happened to him in a long and adventurous life. It went on and on, and essentially took away a year of his life.

Secondly, to a large extent I trust the medical system. That guy in a white coat is a registered or licensed pharmacist. There is years of training, exams, standards. He was acting on the instructions of another guy in a white coat, my family doctor. There's even more training and exams. He is well up on the things that start going wrong with bodies as they get older. I'm of an age where I have to pay attention and get on things fast before they get out of hand.

Once you get shingles, the vaccine can't help you. I was wondering if I had had chicken pox as a kid, and I was assured I had. (Thanks mom!) The risks are low, but the consequence is high in my books. I have a limited amount of time left, and don't want to lose any of it to something preventable. A couple shots and a bit of money is cheap insurance.

Our entire society is built on a web of trusting strangers. It can be in a big complicated world like the medical system where mistakes can be fatal. It can be on the road where we essentially have our life in our hands, and in those of the people driving near us. That the person driving the bus will follow the route, and won't lie to us about which stop is closest to our destination. That we can shuffle money around via plastic cards and invisible instructions. That the airplane will fly and the pilots are competent. That our food is grown, harvested, transported, and sold in sanitary conditions. It goes on and on.

To some extent this happens because of government standards, or industry standards put forward under government regulation. My massage therapist has a certificate on the wall, several of them actually, that she has undergone some number of hours of training. That number wasn't plucked out of thin air, there is a reason for it. Our elected officials have set up a system where people knowledgable in the field can set the standards.

Does this cost money? Of course it does! Some people running for elected office talk about over-regulation, and red tape, and administrative overhead, and how they want to cut costs by cutting all that out.

There is almost certainly some waste and over-regulation in the system. I mean, does it really matter if a massage therapist has to meet a certain standard? Maybe so, if you feel vulnerable about being mostly undressed in a small room with a stranger. Now think about what you eat, and the various meat recalls that happened because the inspection staff was cut to save money. Or Walkerton and the water inspection staff. In my books that is major league stupid.

So my arm is a bit sore right now, which is what the guy in the white coat said would happen. A small price to pay.

Linda got all excited by the sheep she discovered in Hastings. 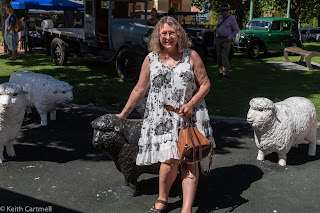 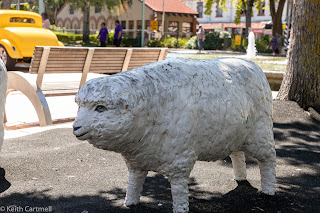 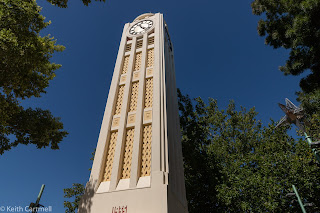