Spring appears to have happened

Funny thing being in the office, I hadn't noticed spring had happened. Flowers are starting to come up in the garden. Just starting. Linda has begun to clear out the winter guck.

In other news I've turned off anonymous blog comments for a while. I love getting comments, and it pisses me off the Blogger won't let people comment from mobile devices. For a long time I used to get a few anonymous spam comments a day. Many of them are amusing in a fractured English sort of way, so that was no big deal.

Just in the last week or so it's gone through the roof, and I'm temporarily sick and tired of it. You need a Google account to comment now, and I'm sorry about that too, because I don't know how you'd get such a thing, or why you would want it for anything besides commenting. Feel free to sent me an email, it's given in my profile. Which needs some updating. Or comment on Facebook and I'll copy it over.

Here we are on an unnamed beach. It's just before you get to Mahia Beach. In our case it was after we left, but maybe that's complicating things. It was just a short stroll after hitting the toilet and before a longish drive home. Yes, that's Linda in the distance. The sand is darker than it appears, and I could feel the heat through my shoes. 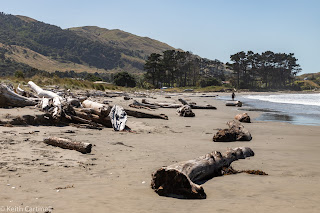 There was a ton of driftwood along the beach, though much of it was not as photogenic as I had hoped. I'm still working through photos, and considering how to deal with the driftwood shots. They are some of my favourite shots because of the texture and colour, but I can see where some of my readers will be bored. Maybe I'll start a driftwood of the day feature. Hmmmmmm.

This one below hadn't quite made it to the beach yet, and was still thrashing around in the surf. It's hard to tell, but this log is huge. 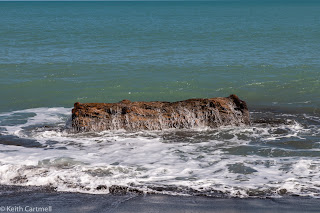 Weekend now. I think I'm settling into this work thing. Last week I was knackered by Thursday. This week I'm still feeling pretty good. Then again, I had done a deep dive trying to sort out some data, which I like doing, and realized there were some problems with the data tables. The first three tables were ok, though there was a subtle thing happening that was not optimal, but not not threatening either. But the join to the fourth was inadequate, and that's where the Cartesian product happened, for some of the rows. Fun times.