Not your typical tourist vacation photo

This is Ocean Beach. I loved it. We went there twice. It's amazing how interesting sand and water can be, at least I think so.

So not your typical vacation photo, but I was trying for something else entirely. Interesting to you? Why or why not? Don't just blow on by, take a moment to follow the lines. 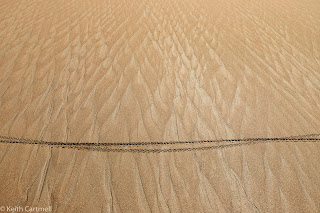 I've been thinking about my photos a lot lately. How could I not be? So far you've been getting lots of the 'so there we were and this is what it looks like' shots. There are a few artistic shots in there, but there's a bunch in the hopper.

I think I'm going to start separating out photos a bit on the blog. There's still lots of photos I want to show you, and tell stories about, but there are some that I think about a bit more, or that capture my attention each time I look at them. Some I was trying to be artistic and maybe I succeeded or not. Some I was trying to capture the play of light on the subject, and maybe I succeeded but mostly not.

So rather than scrolling through a bunch of photos, there might be just the one. Eventually the very best will show up on my photo blog. Still thinking about that.