The tree and the gelato and the couch

No, not a casting couch.  Sheesh. What's that phrase about minds and gutters?

We are in Auckland getting ready for the big flight home tomorrow. We strolled downtown a bit and discovered a gelato shop. Not just any gelato shop, but possibly THE most artisanal gelato shop in the world.

They ask you to wait to be served. They take a batch of people that have never been there before and give you tastes of the gelato. They show you the serving options, and they are amazing. Then you order. This is the best gelato I've had in my life. Also the most expensive. Giapo's. 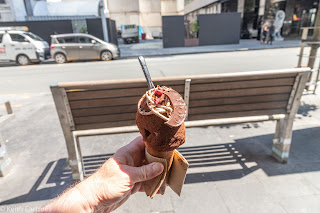 Along the way I discovered this tree, and liked the light. I think the tree is lonely. 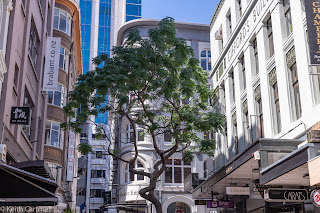 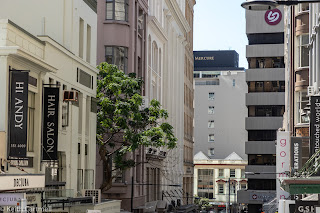 This is the couch I'm sitting on as I write today. As soon as I saw it I thought it looked like the couch one of my characters owns. As soon as I sat in it, I knew. Everyone that sits in it comments about how comfy it is. Her's is a three seater, but the leather looks exactly like this, soft, broken in, warm, cozy. Dwen's couch is covered in a hodgepodge of cushions, a small quilt, books, magazines, clothes, snacks, and who knows what else. 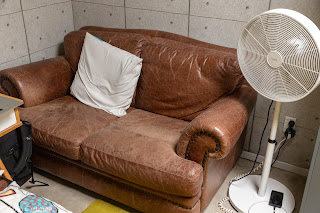 Sometimes the novel intrudes into real life in surprising ways. I was driving home from a dawn photoshoot and had to stop to appreciate one of the homes. It was exactly what I had pictured for a different character. I was having lunch with a buddy one day, and one of my characters walked by. Since she and several other characters sometimes meet up in this coffee shop, I nearly said hello to a stranger and she would probably think I was hitting on her if I told the story. The plant in my stories is a real place, and some of the stories I tell that seem too strange to be true, in fact are nearly exactly true. I'm one of the authors that has muttered, "you can't make this shit up" as I work on a scene.

Anyways, tomorrow about this time we head for the airport to leave NZ. I miss it already.