It wasn't that comfortable, she said

A photo of Linda sitting in a garden. 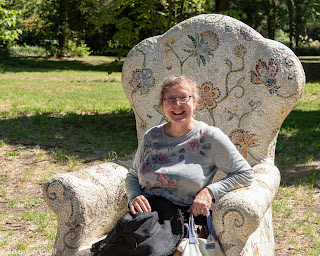 A close up of part of the chair. Little tiles. 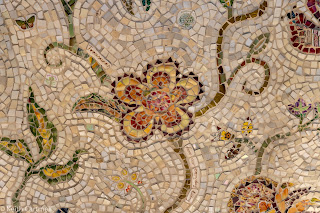 Some more serious stuff, you can skip if you like, or if you've heard enough of it.

As it happens, that chair is in a lovely peaceful garden that is next to the mosque that was one of the targets of a hate filled extremist.

I'm not religious. It isn't any of my business if you go to church or not, or how often you go, or what you call the building you go to. Church, temple, mosque, it's all the same to me. What you believe in your head about God, whatever you call it, is your business. Equally, (and for most religions this is true,) it's none of their business what's going on in my head. A few of them come bang on my door to tell me I'm doing it wrong, and they are subjected to some withering comments.

I'm a weddings and funerals kind of guy when it comes to church. I view the ceremony as theatre, and will be polite about watching it. I consider myself a guest in a space that some people think is important to them. Every church treats their space as a refuge from the world, a place of peace and contemplation. That works for them, and is probably overall good for society.

To violate those spaces is a vile and hateful act. To murder people peacefully going about their business is bad enough, but to do so in their house of worship is a special kind of horrible.

How do we find such hatred before it's acted on? How do we balance free speech and finding the line between "I think we should reduce or stop immigration into our country," and more specific outbursts of vitriol against specific groups of immigrants? Politicians have become experts in so called dog-whistling, saying things that sound relatively (or defendably) innocuous, yet are interpreted by the base as meaningful signals.

I'm old enough to remember politicians trying to bring people together to accomplish something, and sometimes they played fast and loose with the truth. But now they deliberately create wedge issues to drive people apart and appeal to their worst instincts. What's appalling is that there are enough people to make it worth doing.

One of the sources of this hatred are a few so-called-churches that preach hatred as a form of devotion, and they are sad twisted places. No particular denomination is being called out here, there are fringe elements in almost every faith, and like calls to like. I don't know how to balance religious freedom against cracking down on these so-called churches and their adherents. In some senses I don't even mind them believing complete nonsense, it's their actions, doing God's work as they say, that is the problem.

I would say that if God wants something done, It can come down and do it Itself. Us humans are not competent to interpret the desires of a being that is presented as infinite in all ways. Helping the homeless, as an example, needs to be done, and if you do so while saying you're doing God's work, well, whatever gets you through the day. You can arrive at the same place through logic or compassion. But if you're doing something with a gun in your hand, then you've crossed the line. If God wants to smite the sinners, that's up to It. You keep out of the business, and let us alone.

One thing is clear, though. Putting restrictions on the weapons of choice is possible. There is no reason for anyone outside the army to possess a semi-automatic rifle or other weapons of war. Handguns should be highly restricted to on duty police officers and people in similar duty. A rage filled rampage armed with kitchen knives is much easier to deal with, and will produce a much smaller body count.