I've been reflecting on chaos lately, and was inflicted with a small bit of it this morning. Before coffee even. Sigh.

Let me begin at the beginning, or sort of at the beginning. There have been times when large parts of the world were in complete chaos. Nobody knew what would happen next, or why or how the current state of affairs got that way. I'm thinking of The Black Death plague in the Middle Ages, or Spanish Flu in 1918. If you're one of the last people left alive in a town and you're pretty sure you're dying, you can be forgiven for thinking the world has come to an end.

Then there's large scale chaos where nobody knows what happens next, but have a pretty good grip on how we got there, though the why might not be clear. Big wars are like this. Who knew shooting one man would trigger WWI, and the handling of that leading nearly inevitably to WWII? To be fair, pre-WWI Europe was a powderkeg of interlocking alliances and tensions. Any number of events could have set it off.

Stability looks mostly like post-WWII Europe and North America. Orderly elections and transitions of government. Stable laws, with gradual change. In spite of politician hand-wringing and pearl clutching that electing their opposition means the end of the world, generally it just means more of the same. For most people, things gradually get better, though for some people, equality for others looks like a loss to them personally.

Then recently happened, and by that I mean the last decade or two. It's hard to set a starting point, but my general thinking is when politicians start promising to undo things, or blatantly favour one group over another, it's a sign that chaos is increasing.

What do we see now? The UK is mired in the Brexit mess, dragging in the whole EU with no apparent path out of the mess, let alone forward. Don't get me started on America and Trump. On a smaller scale Canada, has Trudeau, the Liberals, and the SNC mess before we've really even recovered from the Harper assault on our values. Australia is thrashing about with ministers resigning in a steady stream, but I'll be the first to say I don't understand it even slightly. New Zealand is currently obsessed with the recent terrorism incident, but there are some background political thrashing there too. They at least are getting gun control out of it, but nobody in the other situations is getting anything out of it, as near as I can tell. Meanwhile other important business is left unattended, and there is no shortage of other important business.

WTF? If you think like a BBC police procedural, who benefits from all this? I suppose that depends on your view of the world. While I love me a good conspiracy theory, I do NOT believe it's the Freemasons, or the Illuminati, or the Trilateral Commission, or any other secret group pulling the strings for it's own nefarious purposes. From there it's a short step to the alien lizards wearing people as skins, and building your own tinfoil helmet.

Nor do I believe that Putin or the Chinese leadership has instigated all this chaos to clear the space for their goals to proceed. It's probably helping them, but to say they masterminded it? That's back to the Freemasons and next you'll be wearing a tinfoil helmet.

The ROWG club (Rich Old White Guys) are a natural suspect. They are suspicious of anyone how isn't "one of us." No matter how much money they have, they want more, and mostly are pretty amoral about it. See the American Republican party as an example. They mostly benefit from this chaos, in a short term sense, much like the French aristocracy benefitted during the late 1700's, and the revolutionaries benefitted shortly after for a little while. I suspect we might be seeing another version of that series of events.

So what happened? If I knew for sure I'd be rich. Mostly it looks like an own goal all around. I think its a matter of the world being so complex now that there are always unintended consequences, no matter how carefully you investigate and plan and consult. For those who believe the world is as simple as a tweet, the consequences come much quicker. As trust gets used up by people doing stupid things and you start assuming the worst of other people, it gets harder and harder to do the right things. We've seen a lot of that.

As a side note, what would I do about Brexit? Cancel the whole mess by revoking article 50 and go back to the status quo where at least people know what the rules are. Then the Brexiteers can put forward a plan for getting out that learns from experience, and see what people think of it in a second referendum. A change this big needs a certain percentage of the eligible voters to cast a ballot (I'd say 75% is a minimum threshold) and to be enacted should take maybe a 2/3 majority. Yes, that's a high bar, but you're proposing huge changes. If the result is good then you shouldn't have any trouble.

What about this morning, you ask? Well, it's a continuation of Blogger comments. Sean was having difficulty commenting. He emailed me some comments, and apologized if I was seeing multiple copies. I had not. Blogger had been eating them.

Then I had my own difficulties. I tried copying the text from the email into the blog comment space. It ate them. I couldn't log into Blogger on that computer. MY OWN EFFING COMPUTER! I'd log in, and it's like it instantly forgot I had. I ended up copying the text to a notepad platform shared by all my computing devices, going onto the computer where the login worked (I don't know why and hope that doesn't change) and putting the comments there. The process involve several swear words.

So in case you missed it, Blogger hates comments from mobile platforms. Since they shut down Google+ the whole google accounts thing has been fraught, and the only way to comment on my blog through Blogger is to have a google account. I'm sorry about that, but I can't change it. You are welcome to email comments to me, or comment on Facebook, or text me, and I'll take care of it.

Here's a chaotic system. We were leaving our Queenstown house to go somewhere, and I had to stop to capture these clouds over The Remarkables.

And last, a new feature, Driftwood of the Day. I'm thinking this is going to be one photo per blog, but I started out with three, well, because. I wanted to get the first two out there, but they aren't part of what I think of as the driftwood series. The first two are mostly a tourist there I was shot, but I was at least trying to think about composition.

The series as envisioned are mostly close ups, trying to find interesting compositions on a small scale, looking at the wood grain, colour, textures, and whatever sand, rocks, metal, or vegetation might be nearby.

As you can probably tell from the rocks, this is Koekohe Beach, where the Moeraki Boulders live. 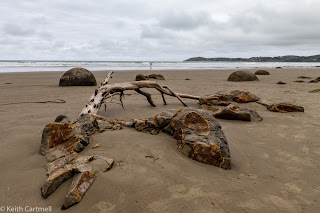 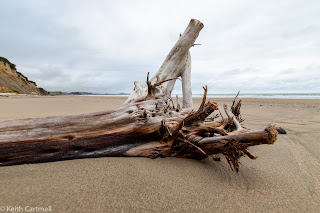 This is either Paekakariki or Paraparaumu beach. (You try saying either one 3x fast, or navigating by listening to Siri pronounce it, and looking for the appropriate sign, while driving on the left around roundabouts.) Given the time stamp I think the first. This is where I started noticing the textures of the wood, the grain, the subtle colours, and the interaction with the sand or gravel around them. Later some rocks got involved. 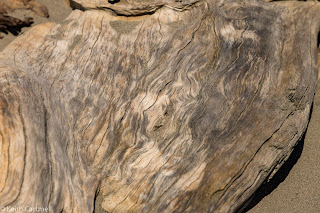