Tracks in the fog

Some tracks are easy to miss. It used to be a valuable skill to be able to follow the tracks animals left behind. Maybe it still is, I don't know these things. But some tracks are unmistakable and unmissable, like the ones down the middle of Calgary, and many other western Canadian towns and cities.

It used to be the railway station was the center of town, and if the town grew, it grew around the station. It was common for a train to block traffic. Even now in downtown Calgary, there are only 8 ways to cross the tracks by car or bike, with underpasses at 4th St SE, 2 St SE (Macleod Tr North),  1 St SE (Macleod Tr South), 1st St SW, 4 St SW (one way north), 5th St SW (one way south), 8th St SW, and a level crossing at 11th St SW.  There are a few +15 pedestrian bridges, a couple of which are cunningly concealed within buildings or parking structures. If you have nerves of steel and don't mind trespassing, sometimes there are gates left open, which let me get this shot. Having buildings disappear into the clouds is an interesting effect. 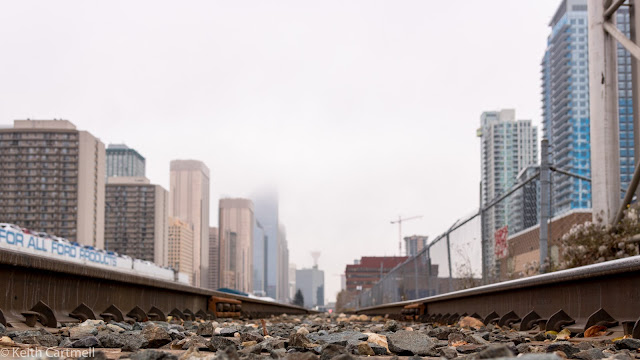 The underpasses have gradually become eyesores. The homeless hang out in them. They are narrow and dark.  Lots of people hate going through them, but have no practical choice. Calgary is finally spending money to upgrade the underpasses and about time.

Sometimes it can be very frustrating to get around downtown, what with the limited railway crossings, one way streets, a couple scramble crossings to be careful of, and pedestrians who don't seem to understand they are taking their lives in their hands by stepping off the curb.

There have been discussions about moving or elevating the tracks, but the expense would be astronomical. Even after decades of growth, there are still empty lots beside the tracks.  The way the economy is these days, if there isn't a building going up on those lots now, it's going to be more decades till another one is started.

In a real sense these steel tracks were the first bones and sinews of Canada. That used to be the only way to travel long distances. Now it's difficult and expensive to travel by rail in Canada, which is a pity. The scenery along the rail line is often stunning. It's much more civilized than what air travel has become. I miss the trains in Europe, where even cars that look old and shabby on the outside are nice inside and travel 150 Kph at least. Some are much faster, and why don't we have them here?

Every now and then people bring up the idea of a bullet train between Calgary and Edmonton, but I don't think the market is there yet. Southern Ontario, from Montreal to Hamilton should be a natural. I remember when I first moved to Calgary there was rail service between Calgary and Edmonton, most days. It was called the dayliner, and ended service in 1985. It seemed that every week there was a news story of someone driving their vehicle into it or thinking they could beat it. Oops.

Now the bones and sinews are air routes and internet links. Airline travel used to be civilized. I flew periodically as a child, and remember men wearing suits, and women wearing nice dresses. Real  steel cutlery.  Airports were fun places to be. Not anymore. Given a choice I'd travel by rail over air any day.

A few weeks ago I was shooting downtown from beside the tracks, and was astonished how many trains were rumbling past. I probably spent more time listening to trains than not. One was so loud I was wishing I'd brought hearing protection. All freight trains though, no passengers. It's an interesting vantage point, but I don't think I'd do it again.

I suppose if I'd been really careful, I might have been able to capture the rail lines meeting at a point off in the distance, in the fog. Maybe next time.