I woke up with a clear thought in my head this morning, comparing American politics to a football game. Some writers keep pen and paper by the bed for exactly this reason, but I had to stumble out to find my laptop. As I was typing frantically to capture my thoughts I also realized that while the moonrise yesterday was scrubbed because of cloud cover, moonset this morning might not be. 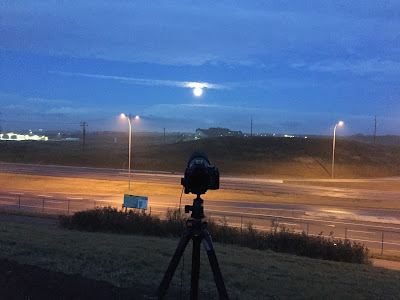 I haven't put the camera chip in the laptop yet to see what I have, but I know I didn't get the shot I wanted. That was the moon setting over the Tsuut'ina resort or convention building. Clouds were rolling in low on the horizon. But some of the others might be ok. On to the political thought, then a good photo at the bottom to cheer you up again.

Hillary Clinton is out there on the playing field. She's had several roles, but is trying out for quarterback. She knows most of the players, all the refs and coaches and management, some of the commentators, and many of the various technical people that  help make it all happen. Some people think she's a pretty good player, other people think she's cheating somehow. She'll sign autographs, but it's clear she doesn't really enjoy it.

There's lots of other players on the field playing various positions. Some, like the quarterback, have a glamorous role, other positions are one of a bunch. Others seem to be out there making it up as they go along, playing their own game. Some of the players are stars in their position, and some are nobodies. Players come and go, and the ball goes back and forth. The fans make much of some aspects of the game, many of which are trivial. The fans don't appear to notice that the price of admission and everything else is going up, or that the people in the box seats are getting a far better experience.

The Republicans have their end of the field and a playbook, as do the Democrats. There are certain standard plays they share, and there is a rule book. It allows for some tricks, but wider than that there are conventions about the game and how it is conducted. Both sides have generally respected these conventions, sometimes giving the appearance of a gentleman's club, or as some would put it, a fixed game.

Recently the Republicans has been bringing in a special team. The problem is that they aren't really playing the same game by the same conventions. They're more like the streaker that bursts onto the field and disrupts things. Entertaining. Maybe bringing a certain skill to evading the people that just want to get on with the game. But ultimately they're a distraction. They belong in the stands, not on the playing field.

And then there's Trump. He's the creep that when he shows up, the building owners call security and escort him off the premises. At least that's what should happen. So far he's wandering around the building making a big hairy nuisance of himself, saying he'd be a better player than anyone on the field, though he's never been out there himself. It's scary that some people believe him.

The other night I was out in the green space to do a dry run at shooting an almost full moon. No luck. The skies were overcast. Here's one of the other shots I took as I was standing around waiting. 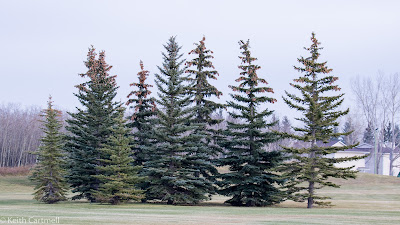