Oct 27, 2007 I started this blog. The very first one is ok, but then it was nothing but fitness blither for a while. Nine years in a couple days. This is blog post number 2190 over 3285 days, or a blog post every day and a half.

It's been fun. Unlike many people that either don't know what to write about, or have trouble finding the time, this usually doesn't seem to be a problem. If anything, the problem is the opposite, to capture the stream of consciousness that goes through my brain, weed out the drivel, and put it in writing in such a way that readers can get some faint sense of what I was thinking. I write about what pleases me, and usually it doesn't take long. I'm not about trying to increase my readership by pandering to the mob. I have a small but loyal readership, thank you guys for reading and commenting.

Like I said, it started as a fitness blog. Then I started slipping in a few rants on various topics. People seemed to like those. From there I branched out to include work stuff, NaNoWriMo, photography both iphone and Canon, and whatever other topics took my mind. One reader used the word eclectic, after a pause to think about it. I took it as a compliment.

So let's deal with fitness stuff and get it over with. The swim mojo is back. Today was 1 K, 18:25 nice and relaxed, even though my stroke had about 100 m of clunkerfest in the middle and some of the flip turns got tres sloppy. Some drill, and an 88 second 100 m, plus some pool yoga rounded things out.

We ran indoors after Sunday's swim. 30 minutes, and my phone says 4.25 k or so, legs feeling pretty good. First run since early October. I was really pleased with my run over the summer, and was a bit grumpy I didn't pace myself better during August. I'll be more careful with my builds next year. I'm looking forward to another winter of running.

I've been on the bike a few times, mostly easy spin to get my butt used to it again, and see what my quads and hams think. My heart and lungs are not working as hard for a given wattage as last year, but my legs feel weaker. I'll be working on that lots over the winter.

Core. My nemesis. I try to be regular, I do. Except I don't. Still, now is a good time to start building new habits.

No work stuff just now, though I'm trying to think about writing and photography in a work sense, in that the way to get it done is to just do it. Which explains sunrise photo shoots. I was thinking of heading out after second breakfast this morning to try for some foggy shots, but it had lifted to be uninteresting, and it started to drizzle in a cold almost sleet sort of way. Yuck.

Part of the joy of taking photos is showing them to other people. The blog has been getting at least one photo every day. Sometimes it inspires the text, sometimes they are not related.  These aren't always just the winners. I've included some that are flawed, sometimes as a demonstration of something I've learned, or because it inspired the blog text.

I've had lots of surprises about what other people think is a good photo, or what they like. I remember one particular photo captured totally by accident. I didn't even want to show it to her, and expected she would ask me to delete it. She loved it! Wanted it tweaked and sent in a reasonably high resolution.

I just started an instagram account (@keithcartmell if you're interested), though it isn't the best way to display them at all, but it is a good way of finding other photographers, and learning from them. I'm investigating a few other options of displaying my photos to best advantage, and to make it easy to buy them, if anyone should be so inclined. Only the winners will go there. One person has been promised a particular shot, and I haven't forgotten. I've had some nice compliments about my photos, and thank you very much!

"They" say that bloggers should do this and that, and there are "rules" about blogging. Post every day. Stick to one topic. Put advertising on it. Don't say "buy my book." Bah! This blog don't need no steenking rulz! So what you've seen is what you're going to continue to get. Unless I come up with other ideas.

Now to the important part of this blog. The cat photos. That's all you've come here for today, I know this. Although Curtis is very literary, often looking at what I'm writing or editing, and criticizing it, he won't put his paws where his opinion is and do his own blog. Celina is strictly verbal. We hear lots about what she thinks of the world in general, and the inadequacies of her humans in particular. 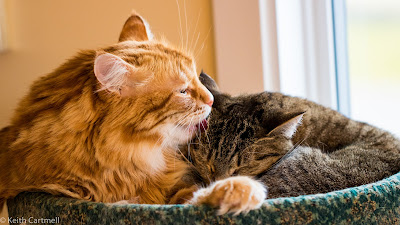 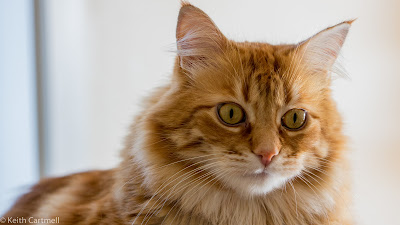 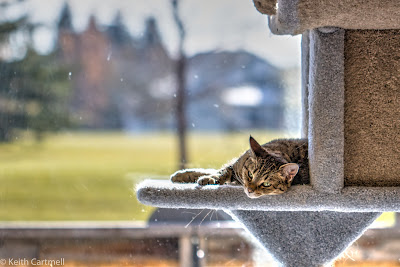