Frosted my bag awaiting the light

It was a chilly one this morning. I've shot downtown from the north several times, but never for sunrise. I have to say the street scene is much, much quieter in the morning, compared to an evening photo shoot. (That's the description, here's the photos.)

Everybody was headed into downtown, with one exception. A woman in a white hat and headphones did the stairs at least 4 times, and ran the hill at least once. Good for her. Hills and stairs are speed work in disguise. If she keeps this up all winter she will be very fast in the spring.

I shot from a few different spots, so if you're thinking you can't get all those shots from the same place, you're right. Lots to look at, even though the light was just ok, nothing spectacular. It's good practice to get out and get the shots.

Thinking of my buddy Neil while shooting this. It's his favourite bridge. Lots going on in this photo, and because it's nearly Halloween I left in some ghosts. In some of the versions I considered for processing, you can just see the mountains, which was a surprise to me. My eyes couldn't see them at all during the shoot. If you look at this one full sized, very carefully, you might see the mountains. 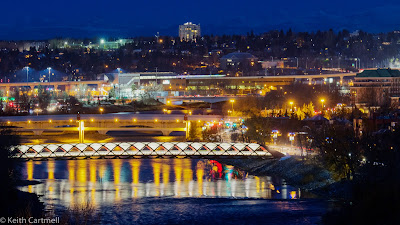 East village. This is as good as the sky got. 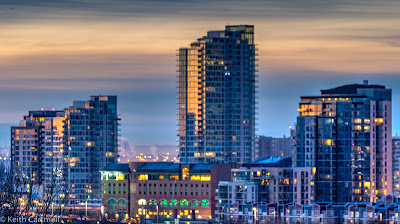 I goofed composing this. I love the contrast between the windows and frame of the two skyscrapers, and how small the hotel looks. 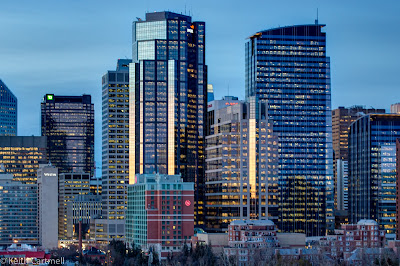 In the always look around, I caught the windows in these buildings winking at me. I hadn't realized the mountains would show up. On the way home I got out of the car and fired this handheld, and I think it's the nicest traditional skyline shot of the morning. 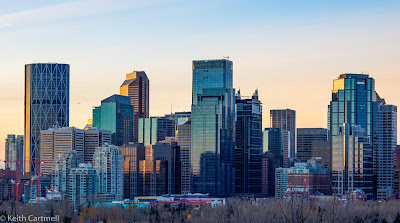 I like taking a picture of the camera against whatever backdrop I'm shooting. I don't know why. Just because, I guess.  Something to do while waiting for the light. 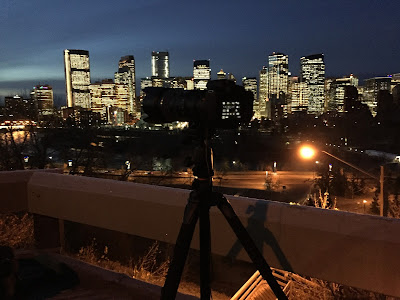 For the last shots I was one landing down from the top of the stairs. They were pretty darned slippery! My bag was sitting on the bench as I was shooting. I thought it looked a lot whiter, and when I got back to the car I realized it had frosted up up quite a bit while I was shooting. 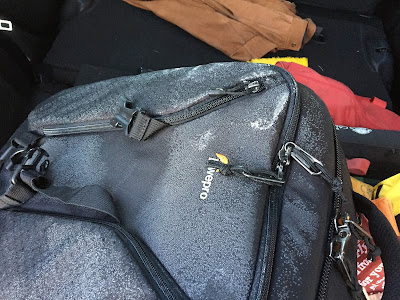 The Anderson pedestrian bridge is coming along. They are working on landscaping. I can't wait to find out what the camera will see at sunset or sunrise. Ran 5 K, 34 minutes, feeling pretty good. Towards the end my hams were talking to me a bit. Longish walk for a cool down, and stretched after. Anyone want to take bets on whether I core or not tonight?