Fleets of black helicopters and cars

I love me a good conspiracy theory, as I've noted several times before in this blog. Two things are coming to mind lately from recent events. Trump spouting the words "rigged election", and in a moment of idleness watching Mr and Mrs Smith.

If you haven't seen it, the movie is a fun watch, by and large. But one of the things about the movie that gets me is not one, but two shadowy organizations that carry out assassinations, presumably at the behest of the government. Or maybe the two organizations are merely branches of an even more secret third organization, perhaps the Freemasons or the Illuminati or the Trilateral Commission. Who knows? There are several scenes of fleets of black vehicles conveying nearly endless numbers of men in black who are up to no good.

This is a recurring theme with conspiracy theories in books and movies. An all-knowing (or nearly so) organization, with endless numbers of vehicles and men chasing some poor sod because he or she has somehow discovered what it is up to.  Usually the poor sod prevails because his cause is just, or is filled with moral righteousness, or something.

Too many people now believe that shit. Somehow they believe in an organization like that, and simultaneously believe one man can defy them to get the word out to successfully oppose them, and somehow such a competent organization can let the secret out and not silence the aforesaid poor sod. Bah.

I say again, bah! It falls apart on so many levels. If this organization really is that competent, they'd be good at keeping secrets, and they wouldn't need to run things secretly. Demonstrate that much competence and you'd be elected in a landslide. If they were competent and somehow let the secret slip, and felt that assassination was the appropriate response, how then would they not hire a competent assassin? And if the organization is incompetent, why oppose it? Won't is simply flail around and fail to accomplish their goals?

Usually the book or movie devolves into an elaborate chase scene, where somehow the organization sifts through a bazillion clues to find the one thing that leads them to the poor sod, and yet can't quite seal the deal. In the movie there is a huge shootout at the end, where these two trained assassins take out dozens of presumably highly trained armed men. Entertaining but not believable.

Which leads me to Trump and rigging the election. The idea is stupid on the face of it. No rational person could believe that. Elections in both Canada and the United States are enormously decentralized affairs. Voters go to a local polling station, run by local officials with the help of volunteers from the local community. The political parties can appoint people to watch the voting process. There is a well defined process for the whole thing, including procedures to deal with human error and potentially fraudulent voting. In Canada millions of paper ballots that are counted and recounted and double checked by a small army of people.  The error rate is trivial, and cases of intentional fraud are essentially non-existant.

The US has paper ballots and various machines, some of which are more susceptible to tampering, but there  is no central choke point where a small group can alter the results wholesale. Any serious effort to 'rig' an American election is going to need thousands of people involved, all of whom are risking a felony conviction and major jail time.  There were a few dozen cases of voting fraud out of billions of votes. Hardly a plausible way of gaining electoral power.

Remember what I've said about a conspiracy? Three people can keep a secret if two of them are dead. That's the key to unraveling most of these theories. How many people are involved and how do they get paid? How are these people coordinated? What do they tell their friends and family about their work? Who stands to gain from the organizational activities? Are there easier ways to achieve that gain?

What distresses me about these conspiracy theories is that it makes it harder for people to work together to accomplish things that make their lives better. To some extent such work is altruistic in that you might not personally benefit from it in a tangible way. You might benefit from what someone else does, but in the current world that's presented as something you deserve, and earned.

When people think some secret organization is running things it lessens their trust and respect for government and various public institutions. Just this morning I was reading of some emergency responders trying to deal with a serious vehicle collision, also having to cope with drivers bypassing the barricades. They felt it was an affront to close the road or something. The RCMP had to be called in to help maintain order. This is ridiculous, to think that the fire department and ambulance crews would close a road just to inconvenience you. Sigh. Or wait, maybe those drivers were fleeing some imaginary fleet of black helicopters or a convoy of black SUV's driven in close formation.

I'm still loving the skyline. In sorting through a bunch of photos yesterday I found one I'd shot from the A. E. Cross Conservatory, which is way SW of Calgary, yet you can see downtown. Or rather, my eyes could barely see it because of the haze, and the camera didn't do much better. But then when I cleaned it up I got this. The other one is from near Deerfoot and Anderson, and I hadn't realized it would show up so well. 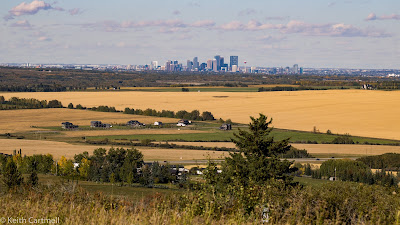 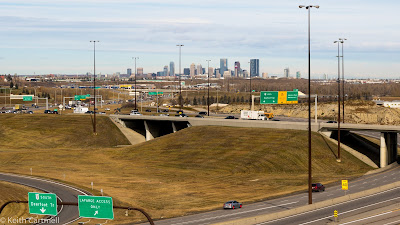