The run map done as it's going to get!

There was a plan to do lots of running in 2016 in preparation for a marathon. The idea was to do lots of the runs on the many bike paths beside water and mark it on the bike path map. Even though the marathon didn't happen, what with work scheduling me for an additional month, lots of runs did. The map was faithfully marked in highlighter. Unfortunately, highlighter doesn't show up as well in photographs as it might.  I currently lack the Photoshop skills to do it electronically.

There's been lots of pathway construction and rehabilitation this year, and a few runs had some unexpected detour adventures. My run buddy is intrepid and up for whatever it takes. We got muddy shoes a few times, and while never actually lost, there were a few times I wondered just where we were going to end up.

Present day:
After I took much of September and October off (numbers later) we wanted to get out in the brilliant sunshine. Not too far, but we wanted to go someplace we hadn't run where we could see the mountains. Success! Plus it filled in a little hole in the map.

Today we parked at Carburn Park, and ran north along the Bow river to where the path stopped (construction) above Beaver Dam Flats in Lynn Ridge, then back and down to the dog park near Southland. Along the way we enjoyed a great view of downtown and the mountains, (I'll have to go back with the camera) plus the river. It was cool and perfect running weather.

As always we talked about everything under the sun, and stopped a few times to look at things. 9K, 1:07:31 nice and easy, even pace which is good what with the hills. As a digression when I was going through Mount Royal last week I photographed one home because I realized that it was perfect for one of my novel characters. Another scene is set near where we ran today, and I saw a couple houses that could belong to Mitch, one of Ceridwen's coworkers. Always nice when reality helps your novel.

I won't run tomorrow (never two days in a row), and I won't be trying to fill in any more of the map. I've already done more than I thought I would. The only piece that I missed was along the canal from Glenmore to Chestermere. Other than that, since it's hard to see the highlighting on the map, I'll give you a list:


Some of these are plain runs, in the sense there isn't much to see, but for many of them there are spectacular views of the mountains, downtown, riverscapes, or scenic parts of the city, and sometimes if you get lucky there are sunrises or sunsets that take your breath away and you just have to stop and admire them. I have absolutely loved exploring the paths! Many of them were new to me (Bowmont Park is awesome!), and even some of the regulars I made a point of running the opposite way than usual.

It works out to:
I realize for some of you, these run totals are nothing special, but I'm pretty proud of my year.  I need to say a big thank you to my run buddies Michelle (best run buddy ever! did I say?) and Patricia (even though she nearly killed me on an 18 K run) who ran with me, and to any number of blog buddies and other friends who encouraged me and took a polite interest as I blithered on about running.

I can hear some of you numbers people asking if I'm going to run 144.8 more K over November and December. I don't know. Stay tuned. Ask me again at the end of December. Do you get a special runner's pin for 1000 K in a year?

Here's the maps, looking weird as I tried to bring up the yellow highlighter.  I took a look at marking up the electronic version, which I didn't see an easy way of doing, then figured out that posting an altered version on my blog would probably be a violation of their terms of service. 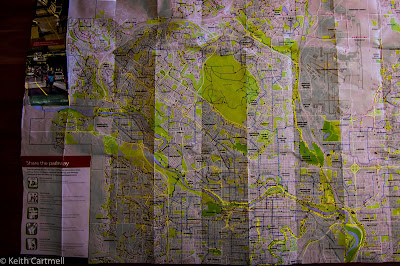 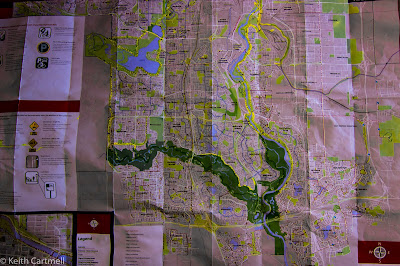 And a graph, because I just know some of my readers are numbers geeks, and will pine without a graph (hello Julie!). 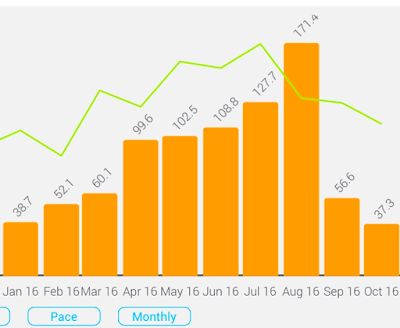