No, this isn't talk like a pirate day. I'm talking about the r sound, often spelled are, or in a nod to pirates, ARGH Matey! But say this to yourself:
bar
car
far
jar
mar
par
tar
war
Oops, wait a minute. Did I just hear wore? Let's try again with the e and see what happens. On second thought, lets ring in the changes on the vowels, just to see what happens.

Go ahead and say those to yourself. It doesn't matter if you go down or across, your tongue is going to stumble over some of them, and not because they are nonsense words.

What's odd to me is that if you look at the ones starting with z, they are all perfectly pronounceable even though as far as I know none of them are actual words in English. A few of the combinations are words in other languages (lire) or are names (Lear), and lots are nonsense words.

And that's just one sound in English. It's fallout from where the words came from originally, and modified inconsistently during the Great Vowel Shift. Don't get me started on the various ough combinations. I struggled against this when I was in school. The whole i before e except after c, except for some exceptions, including my name, made me crazy for years. I went through a phonetic spelling craze for a while, but gave it up.

Even though I'd like to see English reformed for more sensible rules around spelling and pronunciation, there is one big use for it if you ignore the "don't read the comments" rule. Run your eye over the comments and look for misspelled words. Ignore those comments. Yes, I suppose that makes me an English snob. But maybe not. It's aluminum, not aluminium and program not programme in my English. But neighbour not neighbor. "A foolish consistency is the hobgoblin of little minds."

I've had these various words going through my head in all sorts of chains and sequences. I had envisioned some xl highlighting and marks to trace pronunciation, which ones I prefer, which I think are useful variations, and which I think we should drop. Then I remembered blogs are text only, and gave it up as being too much like work. I hope this gets it all out of my head, along with that damn theme song for Empress of China that Linda has been watching.  Some of the political intrigue is interesting, and the costumes and sets are stunning, but the soundtrack is killing me. It's pretty bad when a non-English song is what's stuck in your head.

You've seen the skyline from here in a previous photo, but you can be forgiven for not connecting the dots. The other one was a night shot, cropped in a bit too much, with not enough lens. This is hand held on a hazy day, tired after a long scouting trip. Anyone want to take a guess where I was standing? As a hint, that's Rocky View hospital just in front of Banker's Hall. 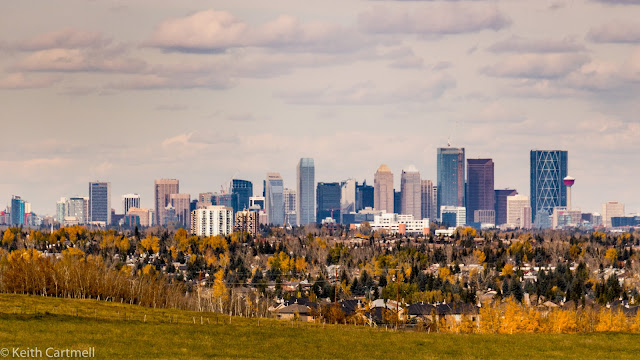