You never know what you'll get coming out of the camera. Sometimes I've been astonished, in that what I see on screen is way better than what I saw at the time, and tweaking in Lightroom makes it even better. And sometimes I'm disappointed. I worked on this image for quite a while, and eventually gave up. Why? I couldn't get all the buildings straight.

It's 3 photos stitched together. The camera was on the tripod, 1, 2, 3. They all leaned slightly to the right, the Bow worst of all, but that was ok. I've fixed that before.

First attempt, merge and then work. Bow was really tilted and the others fairly straight, and so it stayed. Next attempt I straightened all three separately, then merged. The Bow was still leaning more than the others. Played with some of the other settings, and forced it to what was upright compared to the guidelines. All this is after lens calibration, and I played with that too.

The I started playing with the panorama settings, since there are 3 different projections. None was any better than the others. I think now Suncor is the only straight one. The Bow leans to the right, and the 3 condo towers lean to the left.

That's where I left it, since I realized the light wasn't anything special. Even if I got the vertical fixed, the aspect was still a weird size, so I was going meh, and my photo buddies might be scratching their heads about the vertical, and everybody else will be going blah, especially since there was a much better one yesterday.

Enough of that. The learning continues.

Nice swim, followed by a treat at the Perk. I really must start arranging to meet up with buddies more often for this. It was nice to not have to go directly into work, and take my time.

From there was a bit of a scenic tour scouting locations for a full moon shoot this weekend. These two places have promise. The first one I need to be a little further left. The second one, I'm going to need to see if my tripod is high enough to shoot over the railing, or if the lens will fit between the rails. 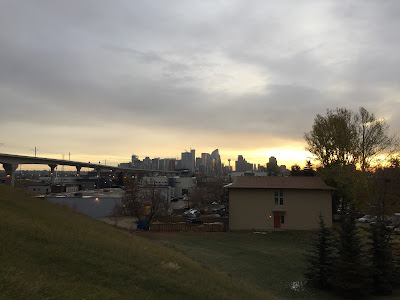 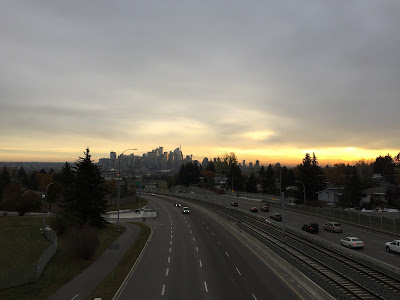 Tax and other paperwork is ready to be filed. I found the initial contract for the Penn West gig, and 7, count'em, 7 renewals. Plus some paperwork for 2009 buried in the 2015 stuff and I have no idea why. Plus lots of research about computer shopping. Uncovered the plants and gave the survivors a drink. There are still a few still hanging in, but my favourites are done for the year.