But she hadn't visited, after all

Since taking up triathlon I've discovered many things about the world and about myself. It's almost all been good. There is almost always a price for learning something new. Sometimes it's purely a dollar amount, in that you pay money to attend a course. In some cases (hello Neil Zeller!) it's a super experience, well worth the money. In others, your employer pays, and makes you go, and the only thing new you learn is that software developers provide all too many ways of doing something you don't want or need to do, and won't let you do something that is crucial.

Life is about priorities, balancing various needs and wants against the price. For some it revolves around their kids, and rightly so. Other people choose different priorities, or have priorities forced upon them. Choosing to be active means choosing differently than many other people. Lot's of people won't understand your choice, and are happy to tell you that you are destroying your knees, or they could never cope with the boredom, or what you do you mean you aren't watching a particular TV show.

But the choice to become more active leads to other choices and activities that are not obvious up front. Laundry, for example. You're going to be doing a lot more laundry. Eventually, no matter how much you launder, you will be dealing with workout taint embedded in your gear. Unless you have tolerant housemates, or ones involved in the same activities you are, you'll be taking more showers. Sometimes that's at the gym or pool, and after a while you'll stop caring about the stupid shower curtain, if there is one at all, or wrapping the towel around yourself, or the separate shampoo, conditioner, body soap, and all that stuff.

When you get more active, you start pushing your body harder, and all sorts of good stuff happens. Your lungs and heart become more efficient. Your muscles become stronger. Your body fat percentage is likely to drop, as will your weight. You'll look better and you'll feel better. If you listen to your body you will be eating better. You'll probably sleep better, find you have more get up and go, and you can concentrate better. As long as you're sensible and don't injure yourself overdoing it, everything gets better.

Other bodily systems, ones we don't think about unless we have to, become more efficient as well. During training and races you will choose to plan for those those systems, or they will choose for you. I've had one adventure that came on suddenly, and I made it home just in time, and another time I was fortunate I'd chosen to run in Fish Creek, not along the path up to the reservoir. No, it wasn't a bush I needed, that's an easy solution for guys. 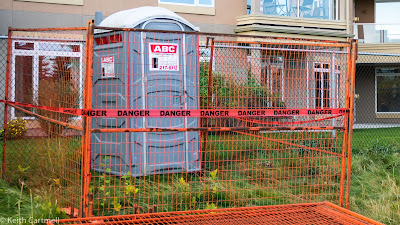 I found this during one of my photo scouting trips, and instantly thought of my blog buddy Beth, of SUAR fame. She has had numerous adventures and has blogged about this with amusing candor. If you haven't read her blog and are new to being active, especially running, you should read it. It is amusing. And it's very candid on some topics. Just saying.

My first thought was that she had visited Calgary and not told me, and had put up the tape herself afterwards out of consideration for others. Of course I shared the photo with her on Facebook, where some of you may have seen it. I think it made her day.

But this would be a cruel and potentially catastrophic discovery if you are running or biking along with gradually increasing desperation. Even the non-mathematically inclined will discover or develop the ability to do distance and time calculations in their head. How long/far to the next aid station compared to how my guts feel?

Sometimes it's better to give in early, when there aren't many people around and some semblance of cover. Did I mention many runners tuck a wet one wipe in their shoe for exactly this circumstance? Better that than the line up being one person too long and lots of other people around. Oops. That nearly happened in one race, where several of us were waiting with varying degrees of urgency. I wasn't desperate yet, so I gave up my place in line to a girl that was asking for help getting on top of a garbage container.

Some of you know I used to operate a wastewater treatment plant, the one that's just north of the Calf Robe bridge (Deerfoot going over the Bow). Recently I toured the Glenmore Water Treatment plant. Similar processes, with my old plant being more complex. It was fascinating. I wish more people would tour it. There would be a whole lot less bottled water being bought. You can sign up through the city website.

Such sanitation is one of the great boons of our society, and people don't often think of it. In Calgary we turn on a tap, and drinking water comes out for as long as the tap stays open. We can choose if it's hot or not. In Calgary the cost of water is $1.79/M3. That works out to being .179 cents per liter. We flush the toilet and it goes away to be dealt with. I could tell you the exact details, but will pass on that, unless you really want to know. I'm thankful for both these systems. Lots of other things too, but these don't get thought of much.

Until recently, historically speaking, this didn't exist, and would be regarded as nearly as a miracle from God. Drinking water was a dangerous habit, which is why drinking wine or beer was so common. Pit toilets were as good as it got. Even now there are many communities in Canada that are essentially still in this world, as are many places around the world. This is shameful, as it isn't a terribly complex technology. Everybody should have access to clean drinking water and sanitary toilets.

At almost every race there is a row of porta-potties, and a line up of people waiting to use them. Nobody likes it, but it's better than the alternatives. We wait our turn, do our business, and use the hand sanitizer after. There's a whole industry that happens behind the scenes, and I'm thankful for that too.

Email ThisBlogThis!Share to TwitterShare to FacebookShare to Pinterest
Labels: Essay