The plant I used to work in had a bazillion M3 of warmish mostly water flowing through it all the time. In cold weather that created a lot of fog. A utilitarian plant with an exterior that at best can be described as 'could be much worse', was rendered into something mysterious, eerie, and yes, beautiful. A foggy night was the setting for the very first bit of what is now about a quarter million words that aren't quite a series of novels. Yes, there was a tentacle involved.

We've had the first really snowy foggy day in a while. I was actually out in it, on the way to the pool. My trip was uneventful, but at least 2 cars had an interesting adventure on the roads, based on the tracks, and one was ruined in a demonstration of driver incompetence on Cemetery hill. A cop car with flashing lights was guarding it, waiting for a tow truck. The tracks were all over the road; I think he bounced off the median and ended up crashed against the right side barriers. It wasn't THAT slippery out.

I kind of like the fog, for all that I'm a sunny day kind of person. It plays tricks on your eyes, and changes the sounds of the world. Strong lights can make the most interesting effects. We don't see the usual things, and that tends to make some people nervous. They get worried about something coming out of the fog to eat them.

The thought crossed my mind to go out and shoot foggy pictures. After the swim the clouds were scudding along with interesting shapes and textures. But somehow, I couldn't come up with a plan of where to go, or what to shoot. I had a lazy day today, napping with the cats. (Message received, I will publish more photos of the cats!) I did a bit of playing in Lightroom and spent some time practicing with split toning. But with the fog, I was feeling in a black and white mood. Any opinions on this photo? 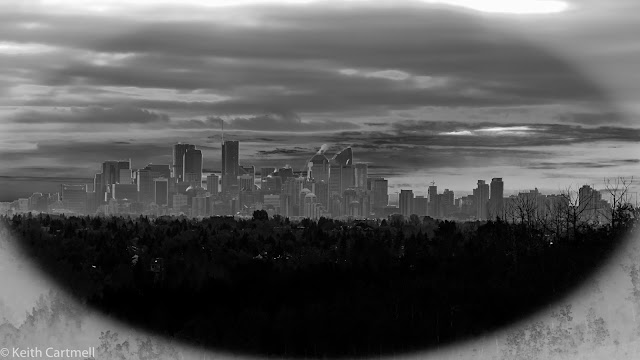