My business tax stuff is almost done, 3 months after my corporate year end. It's filed, the tiny amount of tax owing is paid, the accountant is paid. All that remains is to file things away.

This is more complex than it sounds, since much of the relevant paperwork is bundled in with similar stuff. I found contracts and contract extensions for not just the Penn West gig, but the Talisman one before it. And other stuff that had escaped filing. After a busy morning, I spent a busy afternoon shuffling paper. I filled a whole wastebasket to be shredded.

When Curtis wasn't 'helping', I was getting the cat glare. I was clearly an inadequate human, not giving him the lap he wanted. How many of you could withstand the glare of such a handsome cat? 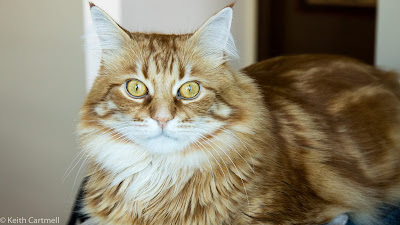 The morning was a sunrise photo session that was more of a struggle than I expected. It was pretty cold, so the choice seemed to be to boost the ISO for a faster shutter speed and get some noise, or go with a longer shutter speed and get some heat shimmer. Plus, I spent shot after shot trying to get the buildings vertical. I'd line up the lines in the viewfinder with one of the buildings, yet it would show up on screen as tilted. In the end I gave up and figured I'd fix it in Lightroom. 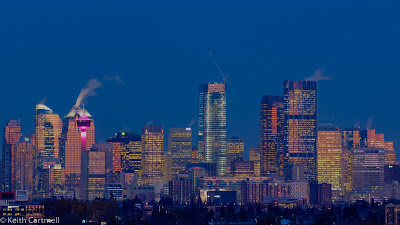 It's better than I expected, but I'm still not entirely happy with it. The light wasn't as nice as I'd like, and the focus isn't as sharp as it should be. Still, another step in the ladder of learning.

However I am pleased with this one. I've wanted to get this effect, and finally had it work out. 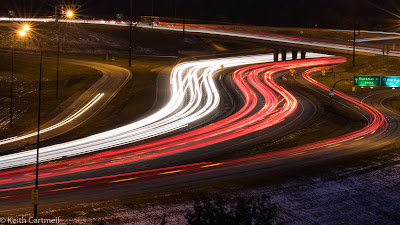 Even though the outdoor garden has finally succumbed to the cold, the inside one is still going strong. 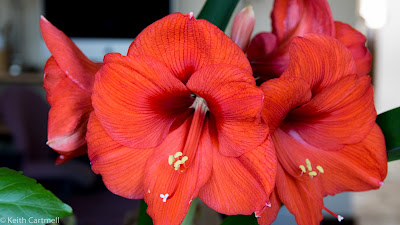 I was in the pool after the shoot and another errand. One of the pools is out of action, so with the swim kids taking up most of the lanes first thing in the morning, it's a bit of a zoo in what's left for us recreational swimmers. Mid morning is much nicer. The swim mojo is slowly coming back.

Yesterday I was on the bike an hour to see where my bike fitness was compared to a year ago. My heart and lungs are doing great! My heart rate is quite a bit lower at each of three different and progressively higher wattages than it was a year ago.

Lactate is 225 watts. Last year I could just barely do 20 minutes at that pace and my heart rate was right at the top of zone 3 and into zone 4. Now it's steady at 130 bpm after 5 minutes, or the transition from zone 2 to zone 3. My right quad was beginning to talk to me a bit, so I didn't want to go into a full blown time trial just yet. I'll do a few more spin workouts to get my legs used to it, and see if I can get a sense where I should aim, before I go into a time trial.

Maybe I can bribe some buddies with cookies, or wine, or gluten free scones, to come over and cheer me on. (Whispers, then do it themselves.)