You never know what you'll discover. You see, even though lots of people think of me as organized, and a prolific blogger, it isn't completely true. The prolific part is, I guess, sort of. Over the last half year or so I've been on a roll. I've blogged almost every day since mid-september, or so. The idea was to publish a photo a day. I'm well past that, since almost all the blogs have more than one photo.

Prior to that I blogged every day and a half or so, averaged since late October 2007. Some of that was so boring even I can't go back and read them, but some are pretty good. You can explore through the labels, or through the blog archive.

But not the organized part. Back to the photo of the day thing. After I'm done editing the photos in Lightroom I export them to a folder, and from there I add them to my blog on whatever basis seems good at the time. The problem, as I've come to realize, is that if I look at a photo in that folder, I have no real way of telling if I've blogged it or not. Sure, if it's only a few days old I'll know, but if it's older than that, we all know what happens to memory as people get older. I want to give you new fresh images to look at, or imaginative reworking of existing images, but if you notice I goofed, don't hold it against me.

I go through spurts where I have all these blog ideas, and energy to do them, and it seems like my material will last forever. One time I was three blogs ahead. Other times, like part of this week, I'm kind of scraping the bottom of the creativity barrel. Lets just say it's been a tough week at the day job. Then I'll forget I was going to blog a particular photo along with a specific writing idea. Lets also say maybe I need to take better idea notes...

One of my fans (not my mom, she already asked for one) wants a print of one of my photos. Really print, on nice paper, not commercial photo paper from an inkjet. To be framed and go up on the living room wall and everything! I think the finished size is 10x15. I'm so excited! I figured since I was going to get one printed, I might as well do some of the other ones that I really like, and update some of the art on our walls.

It was fun going back through the collection of over 1000 edited photos to pick the ones to print, and landing on 4, for now. Some of them you've seen, but even with my memory I know there are two of them that haven't been on the blog. Plus, I'm rediscovering that some of my photos that didn't make much of an impression at the time are actually striking to me now. And why didn't I blog them? Well, I'm pretty sure I didn't blog them. That memory thing...

So I've got 4 prints on paper, one going to my first paying customer. I'm also getting a big 18x32 canvas done of the red combine landscape, as I call it now. I have ever so subtly tweaked the photo from the original jpeg posted. That's going to go up in the living room. I'm also going to get a smaller version of it that I can show around.

The next related piece of news is that I'm closing in on creating an on-line portfolio of all my best work in one place. This scrolling through my own blog to show someone a particular photo is killing me. Remember what I said about not being organized? Stay tuned.

And lastly, thing thing that got me here today in the first place. I'd taken this one during a photowalk with Sean, and somehow it's never been posted. I'm pretty sure. I was scrolling through the folder of photos looking for ones that might like a little Photomatix love, and found this one. I stopped and looked. Not that I'm going to add colour to it, or tweak it. I like this exactly as it is. 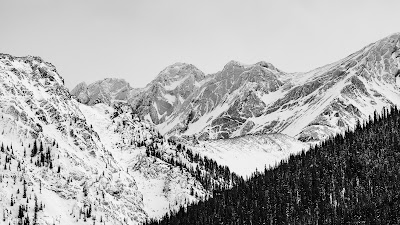