An abstract frame of mind

One of the sure signs of spring here is that we start getting nice fluffy clouds, instead of the flat grey overcast of snow bearing clouds. None of that rain fell on us. 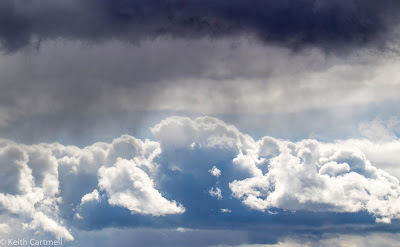 There's an old saying, "What you see is what you get." I'm struggling to learn that this is almost true in photography. It's what you see in your mind's eye, provided you know the technical aspects of operating your camera to capture the potential for that result, that you've done your homework so you are in the right place at the right time for the right light, and a bit of luck in tweaking the light so it's extra special is always nice, plus knowing the software to realize your vision, is what you're going to get.

Sometimes I've been disappointed. Lots of that, actually. But a few times I've gone wow! What appeared on screen was better than what I'd hoped for.

Take these two, shot yesterday after the sunrise and landscape. I was looking around and suddenly realized these could be good. They aren't quite what I'd visualized, since the wind kept complicating things. But if it were easy then everyone would do it and it wouldn't be fun anymore. 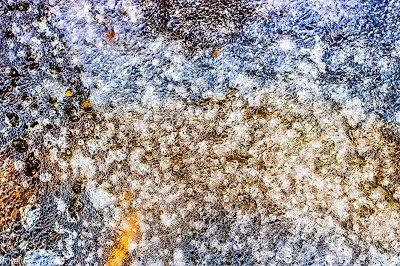 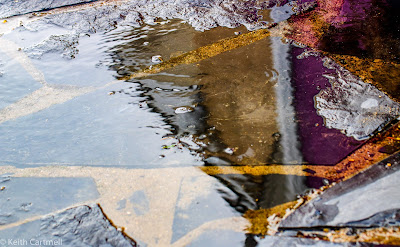 That first image took more processing time than a dozen "normal" images would have. It's the first time I've deliberately done something so abstract, and I was trying to get a particular result. It still isn't quite right, I'd hoped for it being a little more sparklier.

Today I was out deliberately looking for more photos that could be the basis of an abstract piece of art, and I think I've succeeded with one beyond my dreams. I'm going to sleep on it, but I think it's one of my 10 best images, ever.

I talked a little about Bruce Barnbaum's book yesterday, and finished it today. I loved it! Some books you read and you are all meh. Others don't tell you anything you don't already know. Some tell you stuff you know, but do so in a way that compels your attention or relates it to other stuff in ways you hadn't realized. Some talk to your soul, hitting that sweet spot of saying what you need to hear, in a way that makes sense. I'll be going back over it again before it goes back to the library. What he says about composition knocks my socks off.

One of his points is that when he's shooting his medium format camera he takes quite a bit of time thinking about what he's about to shoot, composing it in his mind, before ever he clicks the shutter. (With rare exceptions when racing to capture the light before it goes.) He notes in the digital world it's all too easy to click first and then look what you've captured, and then do it again and again. Only when you get the images onto a computer do you critically assess them.

He doesn't say it quite like this, but it becomes easy to accept what you've got, as what there is to get. You might have to read that again. I've been really bad about this, clicking away madly, thinking I'll find out what's good on screen. What I'm trying to learn is to actually look at the scene and think about what would make it a compelling image, if there's a better way to compose the shot.

Or in another way of thinking about it, what *I* want to do with that shot. There's a bunch of things to think about, and I'm trying to take the time to do that. Since I'm still learning I'll also try other ways, just in case I don't have it right.

I know I can usually get a technically good picture of the scene. It's in focus, and people can see that it's a car, or a mountain landscape, or a bridge, or whatever. Then they yawn. The world doesn't need any more of those, and I don't need to take the time to do it anymore.

Sometimes I get people perking up and saying that they really like a shot, which is nice. And sometimes they are actually enthusiastic about it, which is even nicer. But if you don't know what you're doing to get the shot, then the next nice one will come along only by accident. I'd rather figure out what it takes to get a good, or even dare I say, a great shot, and do that.