The Bow can be a fascinating building. The interesting shape generates fabulous reflections in other buildings, and the reverse. Yesterday during my equinox photowalk I got some nice reflections of the Calgary Tower, and some shots of the brilliant sunshine that turned out really well, along with a bunch of shots of the Bow you haven't seen. There's been some nice things said about the LRT shot, thank you very much!

There were two problems with the Bow photos. One is that it's a tough building to compose a classically nice photograph. The other is the light show put on by the steam coming from the top of the building. It was sending these lovely cloudy reflections down the side of the building, echoed on the various faces. I clicked off almost 2 dozen shots of the clouds chasing each other down the building. It was almost like watching one of those old time barbershop spirals.

A few other people were standing there as well, heads tilted way back, watching. I was completely absorbed by it, thinking about light angles and reflections. I knew I was running out of space on the camera memory card so I put the camera down and focussed on looking at it.

I suppose if I'd been on the ball I'd have tried to video it, but I haven't done that with my camera, and I've no idea how it would have turned out on my phone. Plus, camera video eats memory space big time. As it is, I picked the one photo that I thought had the nicest cloud display, and tried to get the building shape looking nice. 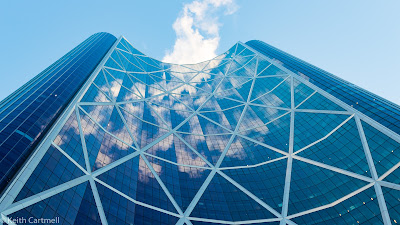 Perspective is a funny thing. We know that most buildings are built straight up and down, but they appear to get smaller towards the top because of perspective. Our brains just deal with it, but cameras aren't that smart. Depending on the lens and a few other things you can get buildings leaning way over. There are settings to "correct" this but often the results look odd to our eyes. Having both sides going straight up in the photo tends to make the top of the building look much larger than the bottom.

Perspective is useful in other areas as well. Problem solving for instance. In one role I was viewed as an extraordinarily good problem solver, but the main reason for that is I had a lot of distance on the problem, wasn't involved in it's origin, and had no stake in the outcome. At work last week it took about 5 minutes to figure out an issue that was driving one person bonkers. It had never occurred to them that a database designer would not spell field names correctly, or even consistently.

There's lots of ways I'm enjoying the perspective that comes from getting older. Many fads are over before I even know they are a thing. Ignoring fads is so restful.  It gets easier and easier to determine if the floating elephant rule is appropriate or not. That's one of my most useful rules for living. Follow the link there and see if it will work for you.