A director's cut, so to speak

You know how on some movies, after the theatrical release, and after the DVD or BluRay, and after it makes a ton of money or the director becomes famous, they release the director's cut? Blade Runner is probably the most famous of these. There are seven versions of it.

Some of my photos have two versions, but lets begin at the beginning. There are an infinity of things to photograph around me, and I choose only one of them at a time, captured a particular way. There might be another very like it captured slightly later. I gradually accumulate electronic data on my camera and eventually decant it to a computer so I can see a decent sized image. Some of those get rejected out of hand for a variety of reasons. Many get nothing further done to them.

Some get edited in Lightroom, and there's a subset of those that get further processing in other software. I end up with photos suitable for sharing on social media or showing to whoever might be interested in them. A very few I tweak for print settings, mainly to see what they look like, and in preparation for the long discussed trip to Resolve.

There are some edited photos that I'm still not entirely happy with, for whatever reason. Some maybe I shouldn't have edited it in the first place. Some might need a different crop to work. Others might need more software skill than I had at the time. I've been going back and revisiting some of those, applying more software skill, and more of a willingness to edit to match my visualization.

I can't remember if I blogged this one or posted it on Facebook. It was taken during a photo walk last August and was dark. I've learned a bit more about software and composition, and had another go at it. I changed the crop to include the people at the bottom and cut out a bit of the sky, plus other software tweaks to bring up the colour a bit. 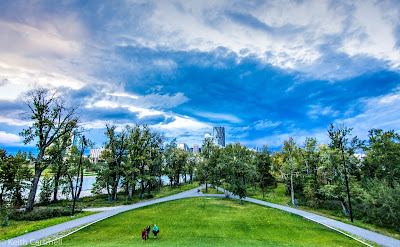 I've been reading about Ansel Adams. 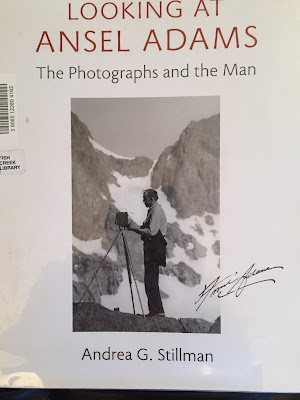 I'd known nothing about him, other than being one of the most well-known landscape photographers in North America. I recognized a few of the images in the book, (duh!) but many were new to me. Part of the enjoyment was looking at the photos and thinking about why the composition works. Why take the photo from that particular there, as opposed to some other place not far away. In some cases there is no other choice unless you want to walk off a cliff.

Plus, I hadn't realized that he made the prints himself, and Stillman goes into the process a bit. Each print is subtly different, and over his career they gradually got darker. In his case, each print is in fact a unique piece of artwork.

That got me thinking. I don't have a printer, but I could get one, then go buy the right paper. Or I could take the file to a printer and have them help me pick the right paper. From there they could produce prints till the cows came home, or they ran out of supplies. But each is essentially identical. I could put a digital signature on each and they would continue to be identical. Or could sign in ink and then there would be a slight difference.

But putting a number x of y prints is meaningless. Sure I could print 100 for example, and if they sold, what's to stop me from printing more? Some people buy art because they hope it will appreciate in value, mainly because it's a nearly unique piece. That isn't true with my prints, or in fact any photographic produced on a digital camera. I suppose they could buy a print simply because I've somehow captured an image they are fascinated with, and want to continue looking at it. That's nice. Very nice in fact, and if any of you have that feeling, call me day or night. I'll get you that print as soon as humanly possible, tweaked and sized for exactly how you like it.

I've been thinking of one of his quotes, "There is nothing worse than a sharp image of a fuzzy concept." Let that roll around in your head. There's a bit of a trick to learning how to get sharp images out of your camera. I'm getting the hang of it. But that part about the concept of the photograph, I've been struggling with that. I expect to continue struggling with it for the rest of my life.