Went for a sunrise, and

I got this instead. There was the faintest of rosy glows along the poles that I wish I could highlight a bit more, or wait till the sun was up a hair more, but that moon moves pretty fast. 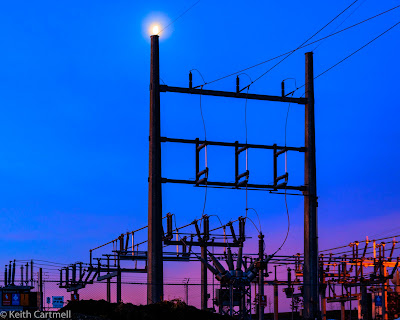 That location wasn't working out for sunrise so I moved down the road a bit, and got a really nice landscape that has someone so excited they want to buy a print. Yay! So I'm not going to show you that one just yet.  You get this one instead. 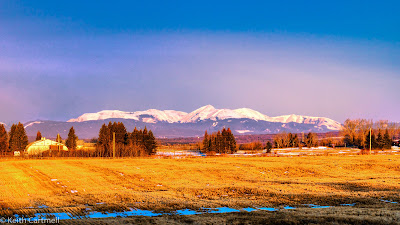 There was a slightly earlier shot of this that had lovely pink clouds over the mountain. Unfortunately, that turned lurid on the computer. Really lurid. Won't be showing you that one.

In other photo news I tried sunset from the Anderson Pedestrian bridge, but that was bleah. The view isn't as good as I remember it being, so I probably won't shoot there again. I'm still thinking of an equinox shot tomorrow, and am willing to meet up with anyone else interested.

In fitness news I was out for a lovely run with BRBE today in South Glenmore park. People are ready and past ready for spring. I was hoping for shorts and a tech shirt sort of run but we were just a bit early for that, so tights and a light jacket were perfect. A few people were doing shorts, but they didn't look happy. I'm glad we got the run done then, it's become really windy this afternoon. That doesn't slow down the BBQ bison burgers, though!

Yesterday got my swim groove back on, right in the middle of a swim. Last Wednesday was a basking shark sort of day. I'm ashamed to say how slow it was. Friday started sort of rocky and clunky and about 400 m in something clicked and I found the groove. The first 500 m was 9:25 or so, and the overall swim was 18:10, so I seriously negative split that. The second 500 (does complicated math) was 8:45. There was a guy in the next lane trying to race me every now and then. Wearing fins. Sorry guy. Maybe if he swam with his hands instead of his elbows he'd go faster.

Deeply involved in this book. Deeply. 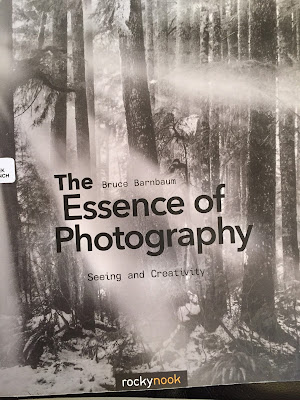