This is the last photo I took during a short photo-walk in Fish Creek last weekend. It's only a few steps from the stairs leading to the parking lot. 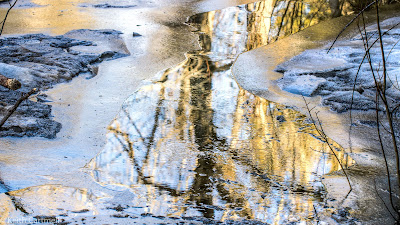 Some might say the ice looks weird, and they'd be right. The thing is, playing with the settings didn't change the ice hardly at all. It looks kind of like grainy blue plastic to my eyes and in the original shot. I was more interested in capturing the colour in the reflected trees.

But it gets me thinking about editing the images from the camera. Sometimes I'm after a fairly realistic look. Some tweaking to dress it up a bit and I'm done. Other times, what I see in my mind is not "realistic" at all. There's been a few times where I've played in Lightroom or Photomatix and deliberately pushed the settings well past realistic.

I shot this next one last October, but the original image was grey and subdued. I didn't really like it, but today I figured what the heck, lets play with contrast and brightness and a few other things and see what happens. 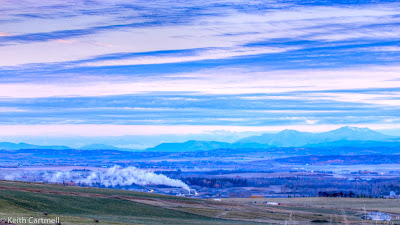 Those blues and purples are not the colours I saw that morning, but they are possible colours here, under some circumstances. I think the grass being a fairly natural green helps anchor it, though maybe I shouldn't say it was kind of grey as well. Once I got here, I liked the mood it evoked.

I shot this one a little later that same day, and was never happy with it either. I'm still not completely satisfied. It looks stretched sideways because of the clouds looking like they are crushing the mountains, and the clouds look kind of fake. Maybe I chopped out too much of the sky. At least tweaking the colour brought up the trees and detail in the foreground, and I liked that. Maybe cropping out some of the sides might make the photo work better. Hmmm.

During my run with BRBE in North Glenmore I was looking at the ice, thinking there might be a layer of water on it, good for reflections. But no. Still ice, if kind of mushy looking. We ran down into the weasel head, and turned around where the ice started at the bottom of the hill, right at the sharp turn onto the flats. It was a lovely day for a run, though we had to dodge lots of people and their dogs. 9 K, 1:08:30, nice and easy and relaxed. My legs were feeling pretty good about it till the last few hundred meters.