My blog brain was overflowing

Yesterday it was overflowing. So many ideas for blog posts.

Today, tonight, not so much.

My work week has gone by in a blur, especially today. Part of it was trying to figure out why a particular query someone else wrote wasn't working right. For a little while I was side tracked by them saying "but I copied the query from one that works, why wouldn't it work here?"

The answer to that is that the query was asking for the field "ConstructionCodeto" and the field is actually named "ContructionCodeto". It turns out there are several others like this as well, where the people that built the database did not name the fields in one particular table consistent even within the table, let alone consistent with similar tables. They are back to square one with the query, and I'll probably see it again next week. And you wonder why people that write code get a bit twitchy about details.

I booked a photo trip for early September, and I'm already so excited! More details soon.

I've been having a blast playing with further edits of recent photos, and thinking hard about composition. More on that in a later post. They look way better, and I'm noticing all sorts of detail in them I didn't notice the first time around. I almost want to go back and look all the photos I've edited to date, but no, life is too short, Plus this process wouldn't be good for the macro flower shots, I think. Hmmm.

Here's another of the recent ones I tweaked to bring up the colour, though I'm still not entirely happy with the snow. I tried making it easier to see the birds, but that just messed up the sky. 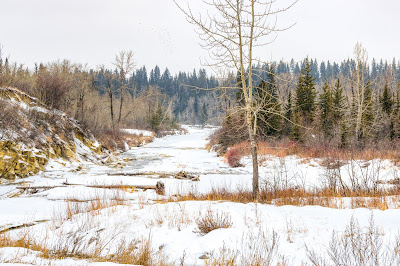