I'm jumping around a bit. These photos are from near bridge 8, shot last weekend as I write this. Flat dull light. As you all should know by now I'm always looking for reflection shots. The problem with that in winter is that water is mostly a mineral.

There are some exceptions, though. It had warmed up enough for some liquid to show, which makes for careful walking on the creek. Ice sometimes makes interesting noises, but no feet got wet in the course of this photo walk. 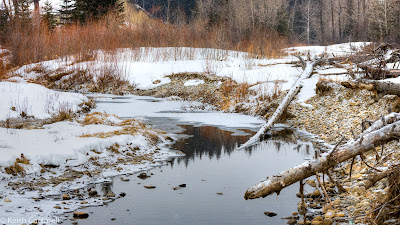 The point of the walk was to get to bridge 8 and get a photo, but none of them really worked. For one thing, it isn't a particularly pretty bridge, and at least from upstream the background for it isn't anything to write home about.

I'll be making another trip there to try again. Maybe the other side is it's good side, or the light is better. Maybe at just the right time of year the sunrise will sneak under the railway bridge and light it perfectly.

A little earlier in the walk I found this tangle of bush. I like the tangles of dead or nearly dead trees as they collapse into the creek. The wood has such interesting textures, and I like the juxtaposition of the dead tree and the living plants. From a composition perspective I like all the diagonal lines. 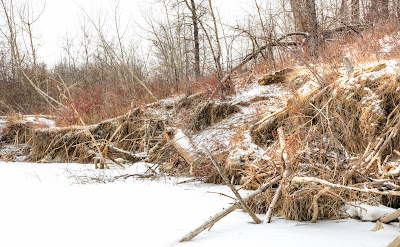