So here we go. You wouldn't believe the pressure from my readers! I finally gave in and bought a Speedo. But which one? Let me know what you think. 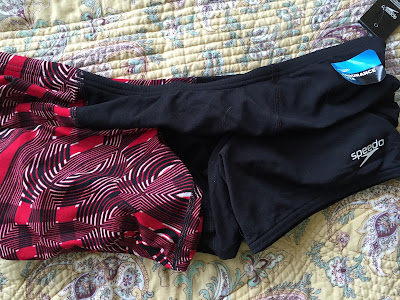 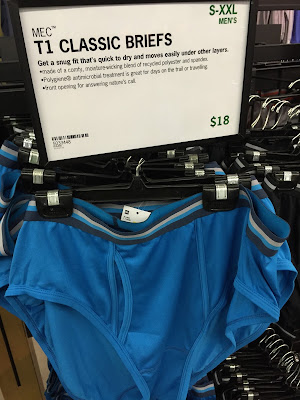 Or to horrify every reader, maybe both?

Lots of errands and zooming around this morning. Curtis had the biopsy stitches in his paw removed, and it's healing up well. Still a bit of an issue we have to keep an eye on. We will start him on some hypo-allergenic food that we hope will help avoid triggering the auto-immune issues. He's such a good kitty, going into his carrier, then coming out at the vet without persuasion.

During one of my stops I finally had a Rocky's burger. Pretty darned good for a commercial burger. Someone else had gluten free poutine. Later there was a burger and poutine fueled run starting at the top of 14th St near the dam, and running over all the new bridges. It turned out to be 11 K out and back. It was a lovely day for a run. Warm but not too hot. Still cool in the shade, of which there was a fair bit along the river. Lots of scenery for both of us to enjoy.

We've been wanting to do this run for a while. During the winter we ran as far as Sandy Beach, and had to turn around. Now we kept going.  Here's some photos of the bridges and the area around them. 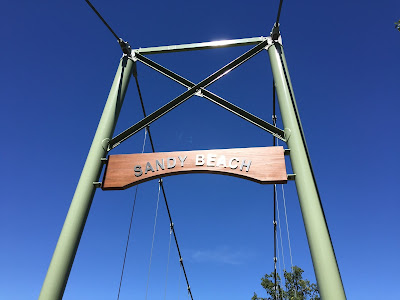 My run buddy, if you hadn't clued in already. 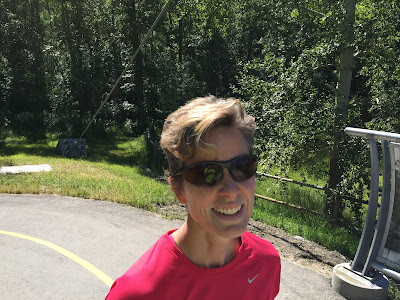 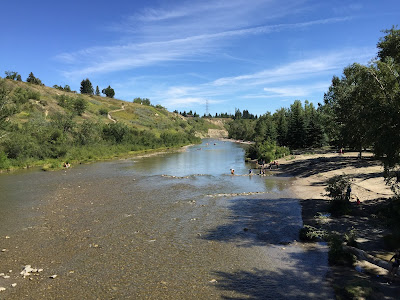 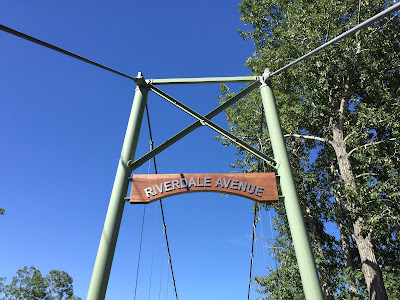 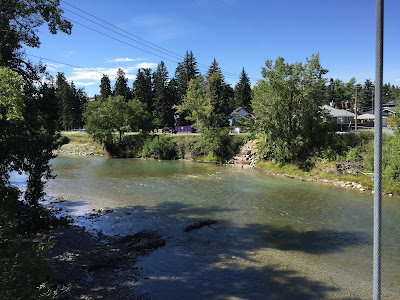 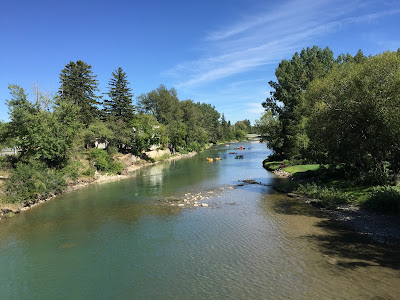 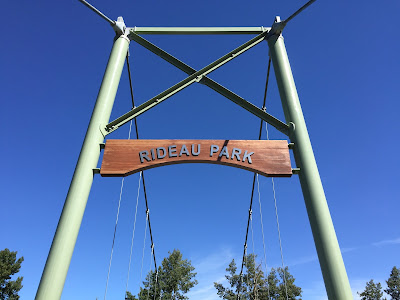 The bridges were destroyed in the 2013 floods. One of them was partially torn from the towers, and had a tree lodged in it. The walking deck was a long way above the river, but it came up a long, long way. Many people didn't like the suspension bridges because they were bouncy and narrow. They managed to keep the original towers, but the new decks are very nice, good for pedestrians and people on wheels. 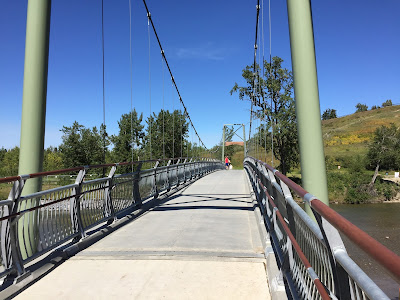 The river valley is beautiful this time of year. Really, it's beautiful all the time. There were a ton of people enjoying the river, floating, wading, or just sitting and enjoying. Sandy Beach and Stanley Park had lots of people taking advantage of the great weather.

We even walked through a vacant lot to get right down to the river. (Only $1.375 MILLION plus a build contract with a particular builder. Holy Doodle!) I can see the attraction of living there, but the floods of 2013 are still being cleaned up. One nice bungalow had some weathered looking notices on the door talking about flood services. I suspect it hasn't been lived in since then. Sort of a pity.

My feet felt really good in the new shoes, but my quads and knees were talking to me a bit throughout the run, especially the downhills. I'm glad we took periodic breaks on the bridges for photos. And a sprinkler was going in Sandy Beach! We took turns holding our electronics and ran through. 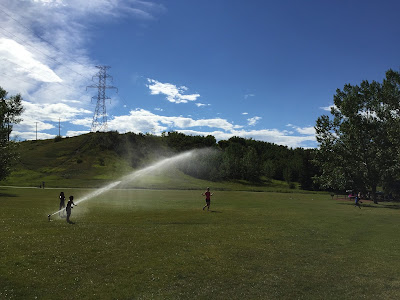 It was maybe a little bit further than I should have run. Jumping from 4K to 11K is a bit much, but I'll give my legs a rest tomorrow. Still, there are a limited number of days this nice, and you have to take advantage. A little soreness and tiredness is a small price to pay.