A tale of two naps

One thing I don't do enough of is take naps. The cats try. They can emit snoreons with the best of them, but we're often so busy we don't even notice. Or we do notice but power through as best we can.

But yesterday after the bike ride I cuddled up with Curtis and we had a lovely nap during the heat of the day.

Today I was up early for a swim. It's a good thing I set my alarm clock! I was up in the middle of the night reading a very strange Twitter thread. Something about me in a Speedo, which kind of horrifies me, and almost certainly horrifies you. So I went back to bed, wondering if it was all a medium-strange dream. (I've had MUCH stranger!) I'd have slept right through without the alarm, which would have crushed my swim buddy. (I've been afraid to go back and look at my Twitter feed for that time of the night. There might be nothing, which would elevate the dream from medium to somewhat strange. Or it's true, and I have Twitter buddies that are more interesting than I had believed.

One hitch is that Linda has learned to snore the sound that a vibrating iPhone makes. She does variety. One night I woke up to the sound of someone shoveling snow. Then I remembered it was July and was awfully puzzled for a while.

So the swim. It was ok. The groove comes and goes. It took a long time to get warmed up. At first I thought I'd do some CSS stuff. First 100 m in 1:40, all well and good. The next in 1:45 and that's just where I wanted to be. Next in 1:51, horrified. Tried harder and ended up 1:52 for a bleah. Gave up on that and settled into some stroke technique. That gradually got faster and faster, and felt better. Settled back into a regular swim, and found the first 100 m ok, the next couple hundred so-so, then it started to fall apart. A bit more technique stuff and I hit the hot tub.

Did I mention on Friday the Purple Perk has awesome treats? Well, they do.

Puttered a bit, then succumbed to the cat snoreons again. After a while I struggled up, and shambled out to mow the lawn. It's supposed to rain and if didn't mow it today it likely wasn't going to happen for a week, and that's too long.

Afterward, all hot and sweaty I realized I was all warmed up for a run. 4.33 K, 30 minutes, mostly easy, 30 C and 35% humidity, which is hot and humid for Calgary. I'd been hoping for 5 K, but my knees started to feel a little unstable, and my legs weak, so I decided to call it a bit early. Still getting back into it.

Two bits of garden stuff. The acquired Irises have been planted, and we somehow have two cherries the birds missed! 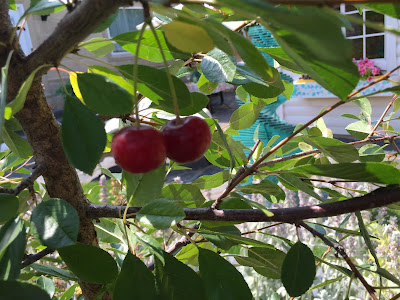 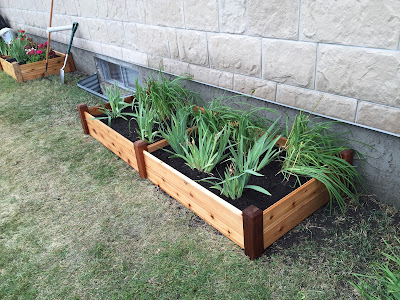 Still no politics stuff, but never fear, I'm building up a head of steam.