It's common in an office for treats to come around. Maybe lunch stuff left over from a meeting. Sometimes treats left over from a party the night before. Let's not even talk about Halloween. Maybe someone brings in donuts.

One of my colleagues brought in plums and handed them around. Home grown plums, very juicy and sweet. I was trying to think if I'd ever been given fruit at work.

Then someone dropped off a huge bag of Taber corn in the lunchroom. There was a brisk run on that. I can categorically state that after 4 decades or so in the work place, I've never been given corn on the cob on the job. And Taber corn, at that. This is the best sweet corn in all Canada, available only for a few weeks a year.

We had it with halibut steaks. Such a tasty meal! And wine, I need not mention.

People at work are happy (so far) that I've finally started on a task everybody but management has wanted done for months. MONTHS! But management are the people that pay me, so I have to do what they say. For a while.

It's lovely out, so I went for an easy half hour ride after work. Just out and around to see what's what. My legs felt pretty good, but there's no real strength in them. I can feel it going up hills.

We had a lovely bloom this morning. It's huge. 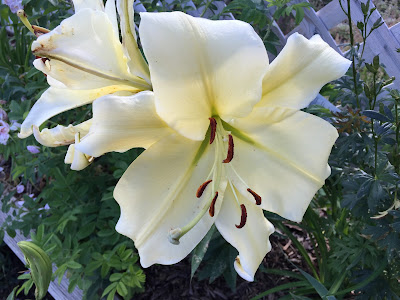