So many things to think about. Some big, some not so big. Some with consequences, and some with no consequences to speak of. None the less, they are all competing for the very limited number of  thinking cycles in my brain. (No snarky remarks from the peanut gallery!)

Part of the problem is that one can't thoroughly think something through, then put it on a shelf and be done with it. Usually something else intrudes along the way and lucky if it's only one something else.   There is a cost when we stop thinking about something, and start thinking about something else. It's not just mental effort to let a whole bunch of stuff go, so you can load up other stuff so you can think about it. There's actual physical effort. It takes energy. The fact that nothing is seen to be moving doesn't mean nothing is happening.

I was tempted to list all the things that I'm thinking about, off and on, but that would just encourage the things further down the list to yell louder.

Where to start? The default thing in my brain now is my novel. I got some really good advice about a small part of it, but it applies to the whole thing. I'm trying to take a step back and look at it again. I want to clarify what the story is and who is involved for what parts of it. Then comes the part of arranging words on a page so that the reader knows what the story is too and what's more, has a reason, or reasons, to keep turning the page.

It's not just one of three large Scrivener files, each of which I'm pleased to call a novel. All three hook together, and I want to consider all three together. What is the actual sequence of events and why? What do I tell the reader about, and what remains hidden?

Part of the problem is that publishers like to label things. Mystery, thriller, science-fiction, fantasy, are just a few of the labels. They know which they are interested in, and how to go about selling them. The buying public is fickle, so there is a lot of uncertainty about the whole process.

There's a joke. How do you end up with a small fortune from farming? Answer, start with a very large  one. (badabump!) The same could be said for publishing.

Of the three files that I'm pleased to call novels (call me an optimist), one is a mystery and sideways love story. One is mostly science-fiction with a hint of mystery. The last one, well, I don't know. Modern life. Beyond one tiny very plausible thing, it's all life as we know it. A big mix of stuff.

Expect me to be working on this for a while. At the moment I'm trying to think about it as a unified whole, broken into reasonable sized chunks, each individually packaged. Later, with great fanfare I'll announce a boxed set, a few with autographs for the faithful fans. (You remember what I said about being an optimist?)

Friday afternoon was spent with my buddy Sean D, drinking beer, eating appetizers and dessert. Neither of us had to go back to the office, so we had several hours of leisurely conversation. I won't say we solved all the problems of the world; we didn't drink that much! But we talked about lots of stuff, including the state of Calgary's market for our profession, that is, business analysts in oil and gas. It's a pretty precarious time. Many of the people we know are not working. One just got a job after looking more than a year.

One of the rules in our business is that you have to make hay while the sun shines. We never know how long till the next contract. I was in a right spot when the music stopped this time. That hasn't always happened. At the moment the job is tough sledding for some reasons I don't propose to get into. The advice, "suck it up, Princess" applies, and is being applied. But I don't think anybody is going to lose the narrative thread if I mention that the words vacation, and retirement, are coming to mind a little more often.

Some lighter topics. We went to the Global fest fireworks show last night. Impressive! If the issues involved in getting many tens of thousands of people out of the park were easier to cope with I'd go every night. As it is, they close 17 Ave for blocks in each direction, and it's full of people heading for wherever they parked, or hope to find their shuttle bus. We did very, very well to be home 45 minutes or so from leaving the park gates.

As it is, we strolled some of the booths, hung out with a buddy, and watched the excellent show with the full moon as a backdrop. It was beautiful. I didn't even try to take photos this year, other than the one of the moonrise below. Why bother when you can go here and look at stunning Neil Zeller images? 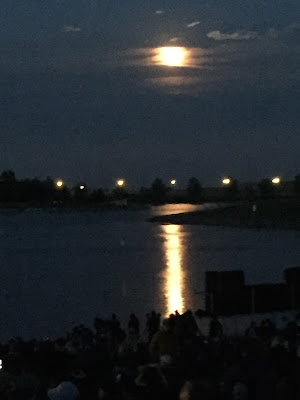 And the cats. They had the right idea today. We settled for lunch with buddies, and puttering around. 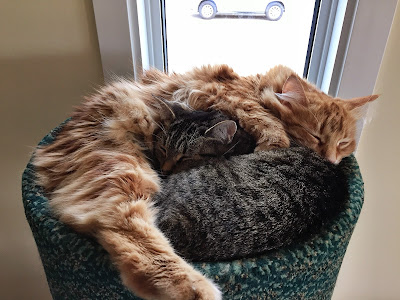