The inner shark does CSS

Considering this is one of the pools at Talisman for the next month, the other pool wasn't all that busy. Maintenance. It has to happen. I didn't mind so much, but the good hot tub was closed. Sigh. 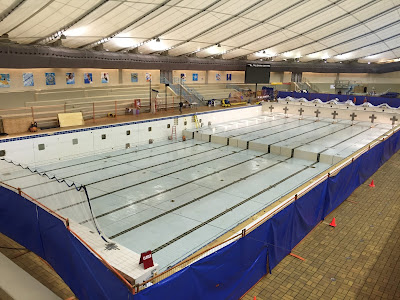 I've been sleeping really hard lately, but not enough. It was a bit of an effort to drag myself into the pool. Normally I don't do warmup. I just get in and swim. Today I put in about 250 m warmup, slowly getting it together while I tried to decide what to do.

Then I realized I hadn't done the CSS thing for a while, and started that. Normally my first one is fast,  and by the third I'm in the groove. This first 100m was slow, about 1:44, which isn't a good sign. The second was a bit faster, and the third 1:38.

Then my inner shark buddy visited, and I got in the groove, then next 10 or so were 1:41 or 42, cruising along nice and relaxed. The shark was not impressed with the prey at all. We chatted about stuff as I zoomed along. My catch was working really well and it seemed effortless. My reach and roll was spot on, though I noticed a slight hitch as I breathed to my right. Then there were a couple where I was working a bit to maintain pace, and for the last one I busted out a 1:37, just because. I was beginning to feel my arms and shoulders a bit. New goggles made me realize how gunked up the old ones were.

15x100 was enough, and a totally lovely swim with a whole short course lane to myself. Pretty pleased at that, though I can't expect that to happen much in September. Cool down, stretch. I think next time I need to start shortening the rest interval, even though that makes watching the clock and figuring sent off times more complicated. Such is life.

On the way out the sun was just barely visible through the murk. 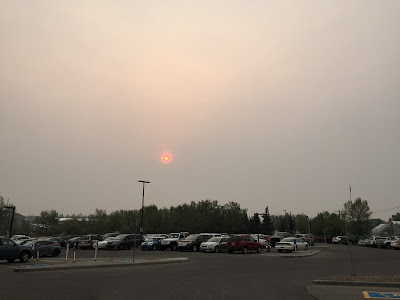 Still murky this evening. The iPhone camera doesn't do the colour any justice at all. It was a beautiful orange. 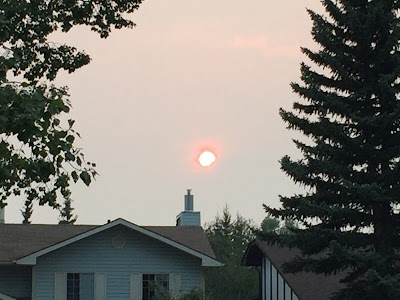 We went out for dinner to Patisserie du Soleil. I've been there many times for coffee or lunch, but this was the first time for dinner. I'm really pleased with it. Nice to have a good restaurant within walking distance.

Right behind it is something I'm less pleased about. Do I have to worry about being tainted with it so close? Still building a head of steam, never fear! 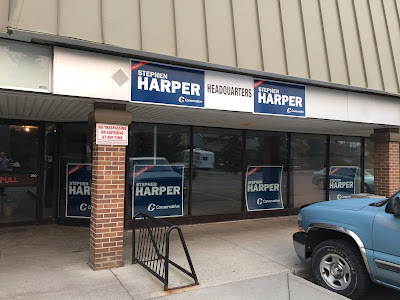